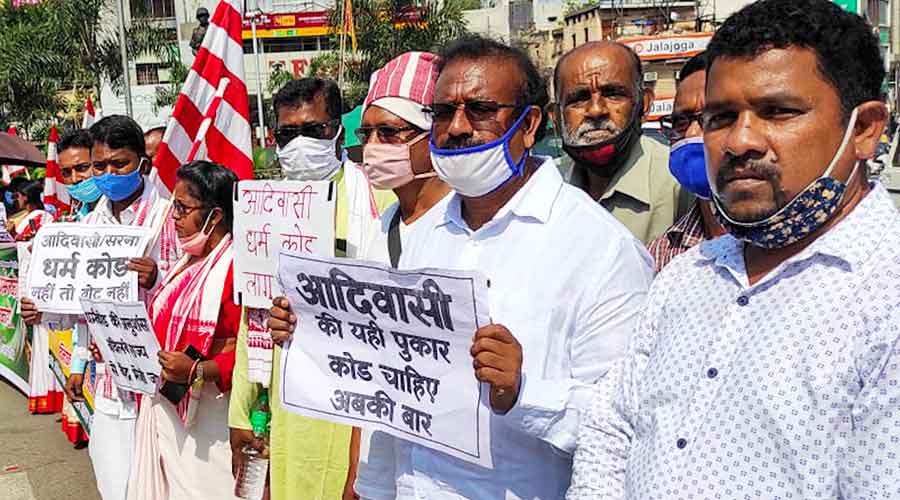 Tribals form a human chain at Albert Ekka Chowk in Ranchi in support of their demand for a separate Sarna code, in October.
Telegraph Picture
Our Correspondent   |   Ranchi   |   Published 10.12.20, 04:45 PM

Tribal organisations are planning rail and road blockades on January 31, 2021 as there has been no word from the Centre on their longstanding demand for a separate religion code for adivasis ahead of the 2021 Census.

The national president of Adivasi Senghal Abhiyan Salkhan Murmu said that joint campaigns would be rolled out with other tribal outfits if the Centre does not agree to their demand for separate Sarna code by December 31.

“After meetings with other tribal organisations, we have decided to wait till December 31 to hear from the Union government on the Sarna code. If it continues to ignore our demand, then we will launch another round of nationwide rail and chakka jams on January 31,” he said on Wednesday night.

Tribal groups have also decided to hold demonstrations and marches to press their demands in five adivasi dominated states of Jharkhand, Bengal, Bihar, Odisha and Assam this month.

“Between December 20 to 31, 200 Sarna Dharam raths (chariots) will be rolled out across these states to mobilise the public towards our cause,” Murmu said.

Following a series of protests in Jharkhand over the last few months, the state Assembly passed a resolution in November for implementation of a Sarna Adivasi Code and formally sent it to the Union home ministry for inclusion in the survey form before the 2021 Census.

For tribals, a separate Sarna code in the Census is the key to a distinct identity, they say, adding that without it they are being classified as Hindus, Muslims or Christians.

Chief minister Hemant Soren has also stressed that tribals, or followers of Sarna were nature worshippers, and hence they deserved a separate place in the Census to retain their identity nationally. In September, churches in the state also threw their weight behind the tribals and wrote to the chief minister in favour of a separate Sarna code.