If only building loos under Swachh Bharat qualified for a record

Naidu praise for masons who built over 200 toilets a year 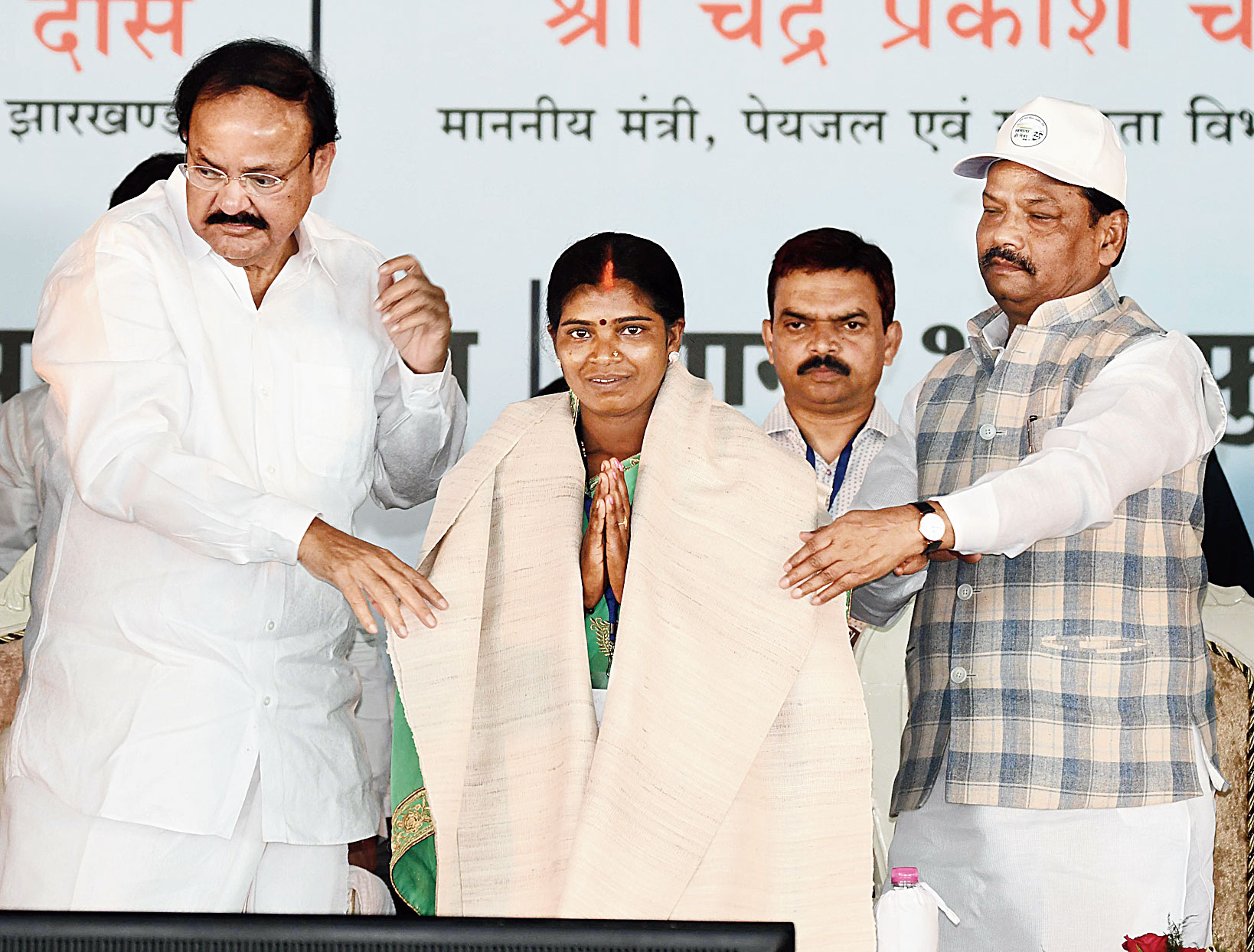 Masons Sita Kachchap, Phoolmani Devi and Kiran Devi used bricks of resolve to build more than 200 toilets in less than a year.

Mukhiyas Pinky Kumari and Subhadra Biswas went out of their way to convince fellow villagers into constructing over 800 individual loos in six months.

The seven rural women, aged between 35 and 50 years, are all role models who provide more than just inspiration. They were felicitated on Thursday by vice-president M. Venkaiah Naidu during the state government’s Swachhta hi Seva programme at Lalkhatanga in Namkum, around 25km from city.

“These are beautiful stories of achievement… of how these women changed (people’s) mindset. They are role models for others. I am glad I had the opportunity to felicitate them,” Naidu said, addressing a gathering of 5,000 at Bhushur Football Ground.

He later laid the foundation stone of a rural water supply project in Chand village of Namkum block in the presence of governor Droupadi Murmu and chief minister Raghubar Das.

Sita, a resident of Kanke, recalled how she balanced home and work to build 148 toilets. “Earlier, I earned Rs 150 a day as a labourer. The government, happy with my work, made me a rani mistri (female mason). Now, I get Rs 400 a day. My house too had no toilet. I first constructed one at home and later motivated others. Life has changed for us,” she said on stage after being felicitated.

Phoolmani of Ratu and Kiran from Khunti, who constructed 50 and 46 toilets, respectively, agreed that training in masonry was indeed life-altering.

Pinky, the mukhiya of Kharkhari panchayat in Dhanbad, said she felt empowered while supervising construction 449 toilets in six months.

Subhadra, the mukhiya of East Narainpur in Sahebganj, told this newspaper that ensuring construction of 379 toilets in her panchayat in five months was a challenge. “To tell villagers that they need to build loos on the same premises where they live is no easy task. People have superstitions. I took the challenge head-on.”

Lata of Barajor in Bokaro is the chairperson of self-help group Ajivika Mahila Gram Sangathan. Her outfit promoted 539 toilets. Bimla, a resident of Jaskandih in East Singhbhum, engineered 676 toilets under her supervision.

Vice-president Naidu, in his 20-minute speech, reminded that Mahatma Gandhi had termed “sanitation as more important than independence” and heaped praise on the Raghubar Das government for its efforts in making Jharkhand open-defecation free.

Chief minister Das said four years ago, Jharkhand’s total toilet coverage was barely 16 per cent. “On this date, 96 per cent households are covered. This became possible only due to people’s participation. On October 2, Jharkhand will be declared open-defecation free. Till January 30 next year, my government will run a special drive so that no house is left without a toilet,” he added.