Hockey queens return from Chile to a warm welcome 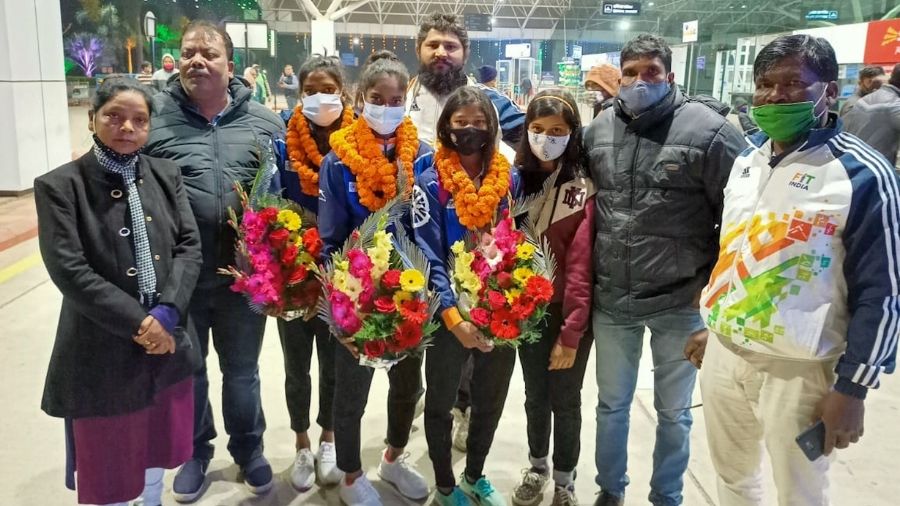 Hockey Jharkhand accorded a warm welcome to three Team India members from Simdega district upon their return here late on Wednesday, congratulating the juniors for their emphatic win over Chile in a six-match series that ended in Santiago earlier this week.

The Indian women’s junior team went there for a six-match series, held between January 18 and 25, with the Chile senior team. India won five matches while one was a draw.

The Jharkhand trio of Beauty Dungung, Sangita Kumar (both forwards) and Sushma Kumari (midfielder) emerged as the key players, scoring between them 10 of the 18 goals that India scored in the series.

They reached their home district on Thursday morning where Hockey Simdega also felicitated them.

“It was a great outing and learning experience for us to be playing in Chile,” remarked Beauty who scored five goals. “We resumed playing hockey after a long gap due to the Covid-19 pandemic. The tour has induced fresh confidence in the side ahead of other meets later this year,” she added.

Her teammate Sangita contributed 4 goals while Sushma scored one.

General secretary of Hockey Simdega Manoj Konbegi said that Team India won whenever Jharkhand players scored goals during the tournament. In the first match, India beat Chile by 5-3 in which Beauty scored three goals and Sangita one.

The Indian (junior women) hockey team, which won the series against Chile seniors) 5-1, with the Tricolour.
Picture by Manob Chowdhary

In the second match, India won by 4-3 with Sangita scoring one goal. In the next match too, Sangita scored once in India’s 3-2 win,e while the fourth match was a draw at 2-2 where no player from Jharkhand scored a goal. In the fifth match, Sangita and Sushma both scored a goal each, giving India a 2-0 win,  while in the sixth match Beauty scored 2 goals to win the match 2-1.

“It’s a matter of great pride that our players are now emerging as key players in the national squad,” said Konbegi, adding that the girls deserved all the applause as they kept themselves motivated through the pandemic despite battling poverty and lack of resources.

“When all training and sporting activities remained halted last year, our girls remained fit by practicing on their own at home. They stayed mentally fit and composed as a result of which they found a place in the Indian side and went on to play crucial roles in the team’s performance at the international stage.”