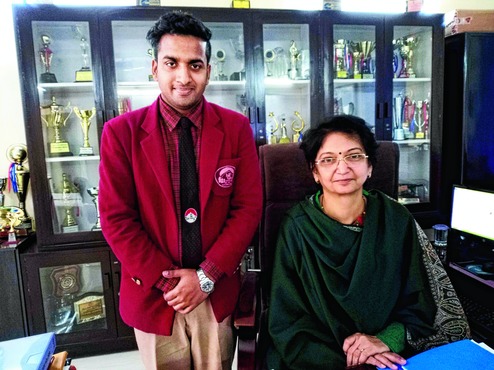 The 18-year-old son of a businessman from Birsanagar has beaten more than 9,000 students nationwide to bag The Next Genius Foundation's prestigious full tuition scholarship to Wheaton College Massachusetts.

Founded in 2014, The Next Genius Foundation is a registered charitable trust in India that offers full or partial tuition scholarships to outstanding high school students so that they can pursue their dream undergraduate education in North America and Europe.

Vaibhav is among the lucky 11 students from across India who've made it to the 11 colleges enlisted for The Next Genius Scholarship Programme. He will receive a full scholarship of 200,000 USD for a four-year course in economics, mathematics and theatre at Wheaton, a liberal arts college in Norton, MA, founded in 1834 as a female seminary. One of the oldest institutions for higher education of women, Wheaton was opened to men only in 1988.

The Hill Top student was among 9,200 students who applied for the scholarship in November last year. He took a critical thinking assessment online the same month. The test measures a student's ability to read effectively, reason efficiently, analyse data and solve puzzles, among other things.

The assessment shortlisted 680 candidates who had to appear for a personal interview in Mumbai by the Next Genius team and the admission officer/s of the respective college on January 13.

"The interview was fun," Vaibhav recalled while speaking to this correspondent on his Telco school campus on Monday. "We had to write about our self, socialise and then analyse what others were good at. There was a hypothetical situation round and a Q&A round. Each college under the scholarship programme chose one student. I could not believe it when they told me then and there that I had been selected," he gushed.

The Man of the Moment, who notched 91 per cent in his ICSE two year ago and is known as an all-rounder in school, wants to focus on his Class XII exams for now.

"This (admission to Wheaton) is my best New Year's gift. I am thankful to my school for guiding me to this opportunity. However, I would now like to concentrate on my ISC exams that begin early next month," said Vaibhav, a pure science student who was aiming to enter the Indian Maritime University, Chennai, before Wheaton came along.

On his unusual course choice, the teenager said he was always passionate about theatre and actor Nawazuddin Siddiqui was his inspiration.

Hill Top principal Puneeta B. Chouhan didn't hide how proud she was. "Vaibhav made it because he is an excellent team player, besides being academically inclined. While the scholarship will cover his tuition fees for four years, the college will take care of his accommodation for the first two years too. We are so very proud of him," she said.