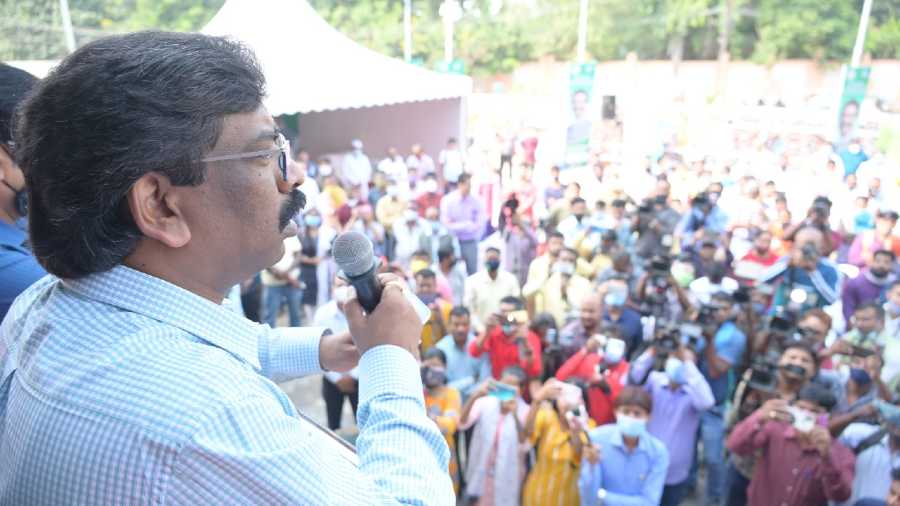 At Naga Baba Khatal opposite Raj Bhavan, the city’s first organised vegetable market complex has been constructed by Ranchi Municipal Corporation over 40,000 square feet by spending close to Rs 10 crore. The two-storeyed market has 195 spacious counters and a basement to house at least 300 fruit and vegetable vendors. It has passages on all sides for easy entry and exit and parking bays alongsode with a food court.

Hemant said he hoped that the new vegetable market would help rid the city of traffic snarls due to vendors hogging roads.  “Now, maintaining this place and putting it to good use is everyone’s responsibility,” he added.

RMC officials maintained that the idea of an organsied vegetable market in this area was primarily aimed that addressing the existing problem of vendors occupying road space. They said RMC would soon allot shops to vendors through a lottery system.

Notably, the foundation stone of the vegetable market was laid in 2017 when the Raghubar Das-led BJP government was in power. It was meant to be ready by 2020 but the project got mired in delays due alterations in design and the pandemic.

At Harmu, Hemant unveiled the Sadar Patel Park at the housing board colony in ward number 26. It is spread over 12,687 sq feet. Rs 2.5 crore was spent on it.  The park has fountains, manicured gardens, walking trails, an open gym, badminton and tennis courts, benches, sliders, cafeteria and a 7-feet statue of Sardar Vallabhai Patel.

“This park was in utter neglect but I am happy that RMC and the urban development department has converted it into a beautiful park, which will cater to all age groups. For elders, there are separate spaces for yoga or just to sit and relax amid the natural environs. For children too, there are enough options to play,” he said.