Hemant Soren seeks 4 weeks, gets 10 days to reply to EC 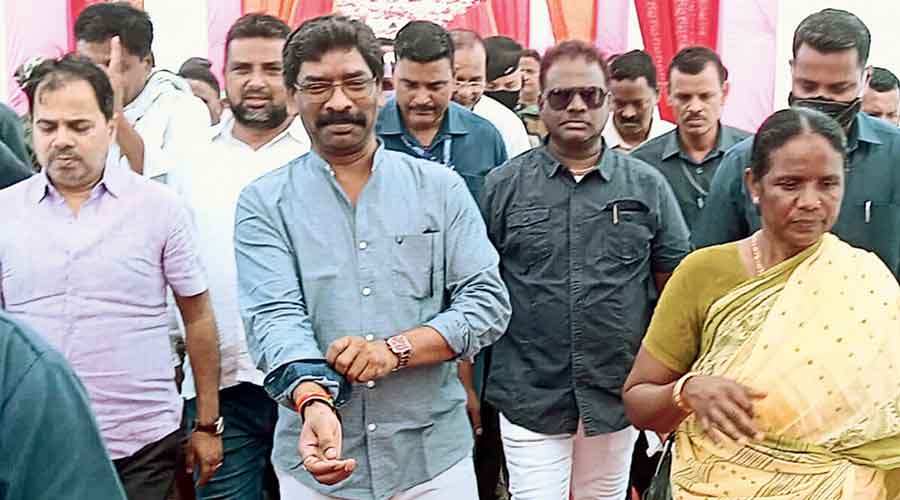 Jharkhand chief minister Hemant Soren has sought a four-week extension to the deadline set by the Election Commission to reply to its notice that he was liable to be disqualified from the Assembly because of a stone quarrying lease in his name last year.

Sources in Jharkhand chief minister’s secretariat confirmed that the Election Commission has given time till May 20 to Soren to reply.

The commission had told Soren to respond by May 10.

“The chief minister has written to the EC seeking more time to file the reply as he needs more time to study it in detail,” JMM central committee member and Giridih MLA Sudivya Kumar confirmed on Tuesday evening.

“Now it is up to the Election Commission to take a call on it. We will decide our further action including legal procedures depending on the commission decision,” he said.

The EC issued notice to Hemant Soren on May 2 after scrutinising a reference sent by Jharkhand governor Ramesh Bais on March 25.

Sources in the chief minister’s office confided that the letter to the EC, seeking more time, was sent on May 5.

“I deny and dispute all allegations of the BJP about my alleged disqualification for being a member of the Jharkhand Legislative Assembly on the ground of a mining lease, obtained by me in May 2021, under the said section 9A of the Representation of the People Act, 1951, or any other ground whatsoever,” the letter of Soren to the EC states.

The letter requests the poll panel to extend the period “by at least four weeks from 10th May, 2022, for submission of detailed reply in the matter,”

The letter cites the illness of Soren’s mother Roopi Soren for the delay in reply. “I submit that my respected mother, aged around 67 years, is critically ill for the past about 8 months and had to be airlifted on April 28, 2022 from Ranchi to Hyderabad for better medical treatment. She is presently under treatment in ICU of AIG Hospital at Hyderabad. In the above circumstances, I have not been able to engage suitable legal counsel to present my defence effectively before the Hon’ble Commission in a matter which so vitally effects my future political career and social life,” the letter states.

It further states about the 600 pages of documents obtained by the EC from the chief secretary of Jharkhand.

“Almost all the documents are in Hindi and I have to arrange for their transliteration from Hindi to English for proper appreciation and understanding of the contents, purport and meaning of those documents by my legal counsel whom I may engage as my defence counsel,” the letter adds.

Soren’s letter also requests for personal hearing by the commission through his legal counsel before the commission formulates its opinion in the matter for tendering it to the Governor of Jharkhand under Article 192(2) of the Constitution of India.

Soren countered a petition in the Jharkhand High Court last week that sought a CBI probe into the mining lease.

Soren told the high court in an affidavit that the mining lease for a 0.88 acre (3,500sq metre) parcel of land on the outskirts of state capital Ranchi was originally granted to him on May 17, 2008, on lease for 10 years. Soren’s affidavit said he applied for renewal of the mining lease in 2018 but the application lapsed. The affidavit acknowledged that he did apply for renewal “sometime in 2021” when Ranchi deputy commissioner invited fresh applications and that the lease was granted to him subsequently as per the laid down procedures. However, Soren said he did not obtain the consent to operate and on February 4, 2022, he applied to surrender the lease before commencing any extraction and the same was subsequently accepted by the department upon payment of the prescribed fees.

A BJP delegation, led by former chief minister and party national vice-president Raghubar Das, had asked governor Ramesh Bais in February to dismiss Soren and have him prosecuted for corruption.

In April, the EC asked Jharkhand chief secretary Sukhdev Singh to submit all documents related to the lease.