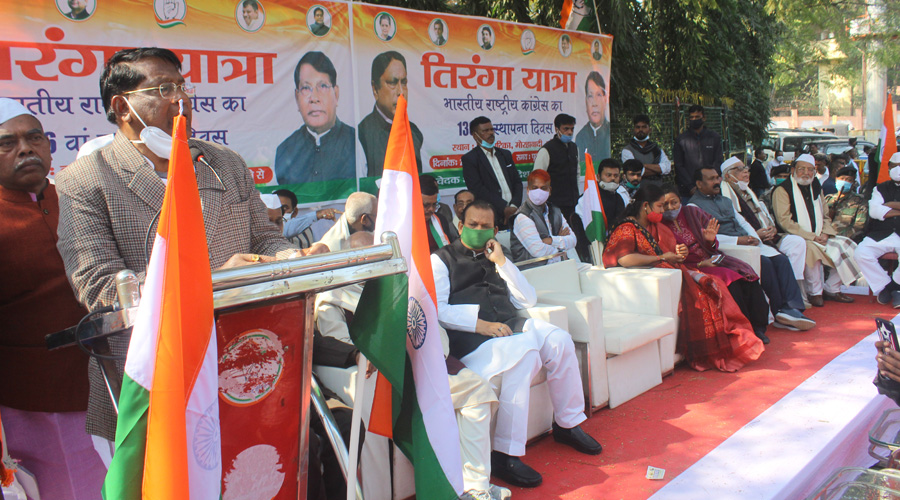 State finance minister Rameshwar Oraon said that the Hemant Soren government was poised to speed up development in 2021 after efficiently tackling the Covid-19 pandemic soon after assuming charge, his assertion on Tuesday setting the stage for Wednesday’s commemoration of the first anniversary of the JMM-Congress-RJD coalition.

The landmark Morabadi ground is being decked up for the mega bash where Hemant is scheduled to lay foundations of, and inaugurate, projects worth Rs 2,500 crore. As many as 15 new schemes are to be launched. Also, job letters are to be distributed to sportspersons.

The function will begin at12.30pm.

Talking to reporters during the 136th foundation day celebrations of the Indian National Congress, Oraon, the state party president, said despite myriad challenges before it, including resource gaps, the government’s focus was on “roti (food), kapda (clothing) and rojgaar (livelihood)”.

“We may not have done miracles in one year, but we ensured people weren’t denied basic resources. During the lockdown and all through the pandemic, the government ensured rations to about 67 lakh poor. From January, 15 lakh more people will be provided green ration cards from the state budget,” he said.

Oraon said to create jobs the government had generated seven lakh man-days of work under rural development department schemes. “The lockdown and pandemic management of our state was hailed by everyone. Jharkhand not only ensured that migrants who were stranded in various places were brought back during the lockdown, but we also fed them and explored livelihood options. A state with severe financial crunch reworked its strategies to devise new modes of earning to continue welfare schemes,” he said.

Next year, the minister added, the government would focus on speeding up developmental work which had come to a halt this year.

There are four Congress ministers in-charge of health, rural development, agriculture and finance in the 11-member cabinet. Oraon hailed the performances of all the four departments.

“In health, from zero Covid testing labs in March, we have now ensured testing facilities at all districts and block levels. In agriculture, despite the pandemic, we ensured that our poll promise of farm loan waiver was fulfilled. Rural development department came up with three new job schemes to boost employment while in finance, we kept the wheels of the state’s progress going,” he said.

To mark the party’s foundation day, a Tiranga Yatra was taken out from the Congress office in Ranchi till Raj Bhavan, covering a distance of about 3km. Party workers, including MPs and MLAs, posted selfies on their social media handles.

Party spokesperson Lal Kishorenath Shahdeo said, “Selfie with Tiranga was a symbolic stance against the divisive forces in the country. It also to show solidarity with farmers protesting against the new farm laws.”