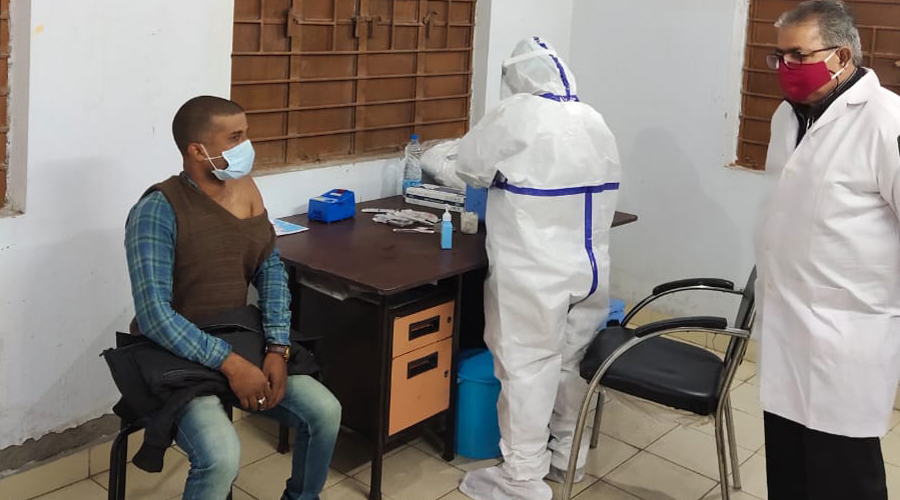 A beneficiary waits for the vaccine at a health centre in Ghatshila during Saturday’s dry run.
Telegraph picture
Our Correspondent   |   Ranchi   |   Published 03.01.21, 07:06 PM

Health officials of the state are satisfied with Saturday’s dry run of Covid-19 vaccination protocols but would like to hold more sessions for operators who would be feeding data in the Co-Win app where details of beneficiaries and doses will have to be uploaded in real-time.

The most heartening outcome of the dry run, held at 13 sites in six districts including Ranchi, was that there was no internet glitch, which is a challenge in itself, given Jharkhand’s varied topography.

“At 13 chosen sites for the dry run, we did not face any internet or other technical glitches,” said state director of National Health Mission (NHM) Ravi Shankar Shukla. “We are hopeful the situation prevails when the actual vaccination happens. Today we have multiple internet service providers that can reach out to the remotest parts of the state. Still, we shall analyse this aspect threadbare in the coming days,” he said.

The vaccine beneficiary is being brought to the centre in Ghatshila on Saturday.
Telegraph picture

The beneficiary gets himself registered at the centre in Ghatshila on Saturday.
Telegraph picture

On Sunday, the Drug Controller General of India (DCGI), the country’s drug regulator, announced the approval of two Covid-19 vaccines of the Serum Institute of India and Bharat Biotech for restricted use, setting the stage for the first phase of the immunisation exercise.

According to the state chapter of NHM, 1lakh to 1.25 lakh people will be administered the vaccine in the first phase, ground works for which was almost ready. During Saturday’s drive in Ranchi, Pakur, Simdega, Palamau, East Singbhum and Chatra, 325 health workers took part.

While the practice sessions were primarily free of problems, Shukla said he was concerned about the possibility of man-made glitches. “For example, at one centre in Pakur district and another in Bundu in Ranchi, data entry operators initially fumbled with online registration and data entry. So, we need to hold a refresher course to help these people to go through the process again.”

Beneficiary health workers wait to enter the centre for a dry run of vaccination protocols in Ghatshila on Saturday.
Telegraph picture

A health worker gets her temperature checked in Ghatshila on Saturday.
Telegraph picture

Sources in the health department said they were expecting to start vaccinations for the first phase from the second week of January. “We will get a formal intimation. But we think the vaccines will start arriving by next week,” said an official.

Shukla doesn’t anticipate major hurdles in the first phase as the chosen beneficiaries will primarily be from the health services. “Those identified for the first phase of inoculations are mostly from the health sector who are aware of the dos and don’ts. So, we don’t anticipate much problem in administering the vaccine to them. The real challenge will lie when the general public will be covered,” said Shukla.

Palamau civil surgeon John F Kennedy said around 3,500 health workers would get the vaccine in the district in the first phase. Asked whether he was sure about the infrastructure requirements, given that Palamau is one of Jharkhand’s remotest districts with serious connectivity issues, he said, “Let’s hope for the best.”