The headmaster of a government-run primary school in Tilaiya Panchayat of Govindpur block is implementing technology and adding an aesthetic ambience to educate children of farmers and daily wage earners of Pargho village.

Niraj Mishra, 40, of Prathmik Vidyalaya is using  technical gadgets like projectors and a public address system at the school. He has also installed a fountain, wall paintings, depicting poetry scenes, charts of body parts, wild life all across the campus of the single-storey building.

“Through the public address system, I run audio of rhymes for one class and simultaneously instruct students of other classes to complete their homework,” said Mishra.

A wall painting at the school. corridor of Prathmik Vidyalaya, Pargho 3.
Telegraph Picture

Mishra joined the school in 1999 and served the school single handedly till 2006 before the appointment of  para teachers.

“Serving the school single handedly for seven years  sometimes I found it difficult to manage the students of standard I to V seating in different classrooms  and thus developed the public address system on my own for different classrooms investing around Rs 8000 from my salary,” said Mishra to The Telegraph Online.

“As majority of students are Santhali speaking so initially after joining I faced a lot of difficulty interacting  with them  as they do not understand even a single Hindi word,” said Mishra.

“I made two different interventions to interact with them including one by making stamps of various animal, birds, trees and things lying in their surroundings by printing the figures made on the stamps and later I bought a projector on my own which is used to play the video of lessons taught in class room,” he said. 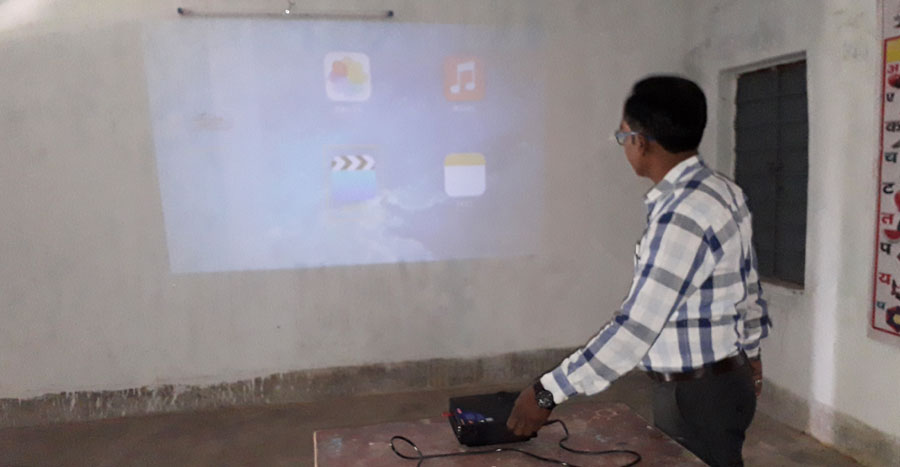 During the lockdown, he used to teach the children of his school by uploading his lessons on his Youtube channel, digital e gyan.

Asha Devi, a para teacher and former student of the school, said “inspired with the self less work of Niraj Mishra sir we also launched  some innovative work and have grown several vegetables in the school’s kitchen garden to meet the vegetable requirement of the school for mid day meals etc.”

Praveen Kumari, Head Mistress of Kanya Prathmik Vidyalaya, Kharni said, “When i first visited the school of Niraj Mishra sir I could not believe that it is a government school as the facilities were better than any private school and stands tall as an example of dedication towards his mission to educate common children”

Santosh Mahto, a former student of the school, presently posted in Ranchi as civil engineer said, “the strong foundation received under the guidance of Niraj Mishra sir helped me to excel in life.”