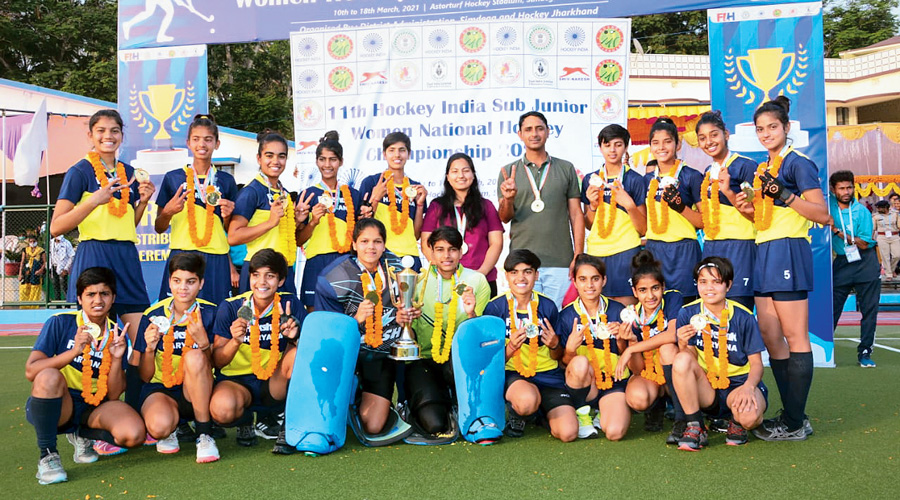 Teams from 22 states participated in the meet that was formally opened by chief minister Hemant Soren on March 10.

Though goals rained throughout the championship and strong teams scored up to 17 in a single match, the closely contested final ended in a goalless draw and the winner was decided in a shootout where visitors Haryana scored four goals against three by the hosts Jharkhand.

This was the first time a national hockey meet was held in Simdega that has produced many national and international players, both men and women. Local enthusiasts thronged the stadium braving the sun and also ignoring Covid-19 restrictions.

While both the teams in the final missed quite a few opportunities to score goals, their defence line deserved plaudits for successfully restricting the opponent.

Since Haryana made forays into the Jharkhand territory more often, the defence line of the host state deserved more praise as it stood like a wall that was difficult to breach.

Jharkhand goalkeeper Jecinta Lugun drew attention from the very beginning when she foiled an attempt by the Haryana team to convert a penalty corner in the opening minutes and lived up to the expectations during the entire match.

The fate of Jharkhand was, however, sealed when it lost the first opportunity of scoring a goal in the penalty shootout and eventually could score only three out of its five attempts. Haryana, in contrast, missed just one attempt.

Before the match began, the players were introduced to Kamini Shrivastava, acting vice- chancellor of Ranchi University, who was the chief guest on the occasion.