Gun-shot attack at Adityapur by drug peddler gang, one arrested 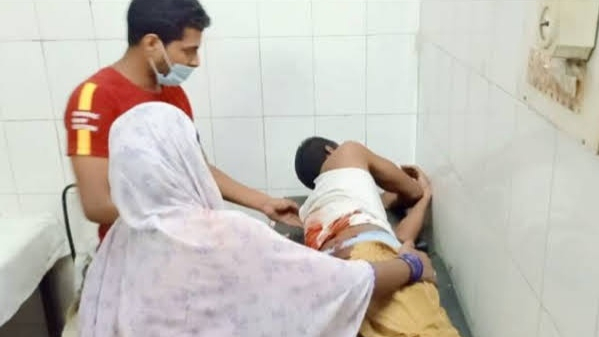 Barely a fortnight after Dolly Parveen the lady kingpin of an infamous drug supply racket was arrested, associates led by her husband on Thursday night shot and wounded his brother-in-law in a twisted family drama after the latter, suspected to be  police informant, decided to install CCTV cameras to expose the continuing sale of drugs in Adityapur Muslim Bustee under Adityapur thana area in the adjoining Seraikela-Kharsawan district about four kms away from here.

The victim, Ramzan Hussain (30) sustained gun-shot injuries in his waistline and has been admitted at MGM Medical College Hospital, where his condition is described as serious.

Police have arrested one of the attackers, Moiuddin Chisti, from his house at Adityapur Muslim Bustee early on Friday morning, whereas the three others, including the main culprit Mohammed Kadim, who is Dolly's husband, are absconding.

Officer in charge (OC), Adityapur thana, Rajesh Prasad confirmed that they have arrested one of the four accused, who were involved in a gun-shot attack on Ramzan at Adityapur Muslim Bustee.

"From the preliminary investigation it is learnt that Kadim, who had conspired the attack on Ramzan had suspicion that the latter had informed the police leading to the arrest of Dolly on July 19. This was the reason that Kadim, alongwith his associates, Saddam, Aurengzeb and Moiuddin had swooped over the house of Ramzan at Adityapur Muslim Bustee late on Thursday night. The attackers had fired several rounds of shots at Ramzan, causing him to sustain two shots in the waistline," said the OC while talking to The Telegraph Online.

According to sources in the police, a section of the Adityapur Muslim Bustee residents was opposed to the sale of narcotic drugs at the slum.  Dolly's brothers Ramzan and Sabir also opposed to the racket of brown sugar sale at the slum.

"So long as Dolly was not arrested, the act of running the racket was under her control completely. But after she was arrested on July 19, her husband Kadim started to run the business by engaging criminal elements like Saddam and Aurengzeb. Having come to know about the resumption of the brown sugar sale at the slum once again, Ramzan who was opposed to this illegal business, had decided to install CCTV cameras at some strategic points at the Adityapur Muslim Bustee and also at home. Kadim had opposed the act of installing the CCTV cameras at the slum, fearing that the police will get easy access to the drug peddlers," said the sources while talking to this website.

Sabir said his brother-in-law Kadim had first tried to convince Ramzan not to install the CCTV cameras having come to their house at the Adityapur Muslim Bustee on Thursday afternoon.

"But as my brother refused to oblige and expressed his intention that he wanted to keep his surroundings clean of any drug business, Kadim had swooped over our house along with four-five criminals. After shooting at my brother, all the accused fled the scene by crossing the nearby railway line," said Sabir, who claims to be an eye-witness.

According to police, Moiuddin was arrested from his house at about 5.30 am on Friday. The police are trying to arrest the rest of the accused and have been conducting raids at different places in Adityapur and its adjoining areas.

In another incident, a 35-year-old man, Mohammed Javed was shot at and injured by a gang of three youths near Albela Garden under Azadnagar thana area in Mango at about 10.30 pm on Thursday.

OC, Azadnagar thana, Vishnu Raut while talking to The Telegraph Online said "Javed, who is a civil contractor and resident of Old Purulia Road in Mango, was returning home and had stopped at Albela Garden after seeing some youths fighting. As he intervened to disperse the warring youths, one of them fished out a pistol and fired a shot which hit the victim's left hand. We are trying to identify the one who had fired the shot."