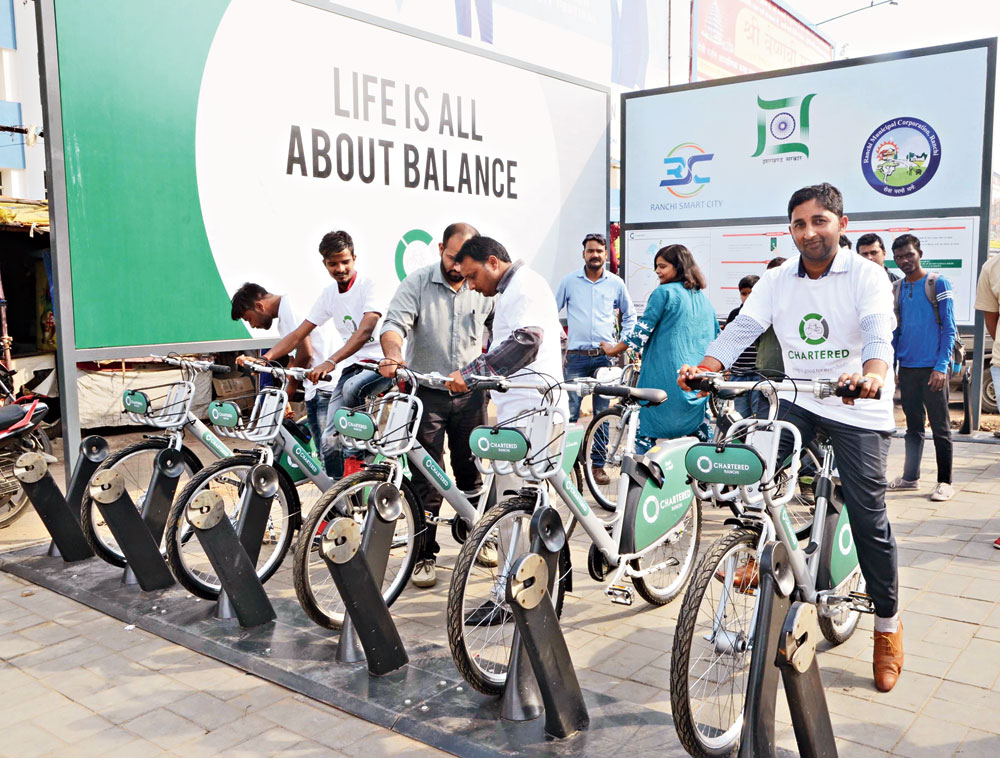 Come Sunday, the state capital will roll out its app-based bicycle sharing scheme with a pedalling marathon to create some extra buzz about the eco-friendly mode of commute that is also easy on the pocket.

Anyone who has downloaded the Chartered Bike app and completed registration can join the 4.5km Cyclothon from Morabadi grounds for free on March 3, the tentative day of the launch. There will be no user charges for participants.

“The Ranchi Cyclothon is meant to promote the bicycle sharing scheme. We have proposed the first Sunday of next month because once the elections are announced, the code of conduct will come into force and the launch may have to deferred. The authorities have, in principle, accepted the proposal,” said an official of Ranchi Smart City Corporation (RSCCL).

The chartered cycles are part of the Smart City project and the RSCCL is a special purpose vehicle incorporated in September 2016 to execute the grand plan.

The organisers of the Ranchi Cyclothon expect around 400 participants.

Ahmedabad-based private agency M/s Chartered Bikes will run the scheme for six years from the day of launch.

General manager (technical) of RSCCL Rakesh Kumar Nandkeolar said the Ranchi Cyclothon would not only help people get accustomed to the new bikes, but also interest them in regular exercise. “Cycling is a great exercise that helps battle the bulge,” he said.

The scheme had seen a successful trial last Saturday with 18 cycles being rolled out near Albert Ekka Chowk. The agency is now ready for formal launch, stressed RSCCL spokesperson Kumar.

The state cabinet had in August 2017 okayed the plan to roll out 1,200 cycles from 120 docking stations in two phases from November 2018. However, the plan could not take off on time owing to delays in assembling imported spares and setting up a software control room.

The Chartered Bike app is available on both Android and iOS platforms. The subscription fee is Rs 30 a day, Rs 200 a month and Rs 1,000 a year. There are also nominal user charges, but the first 30 minutes are free. People who do not have access to smartphones can purchase tickets to use the cycles.