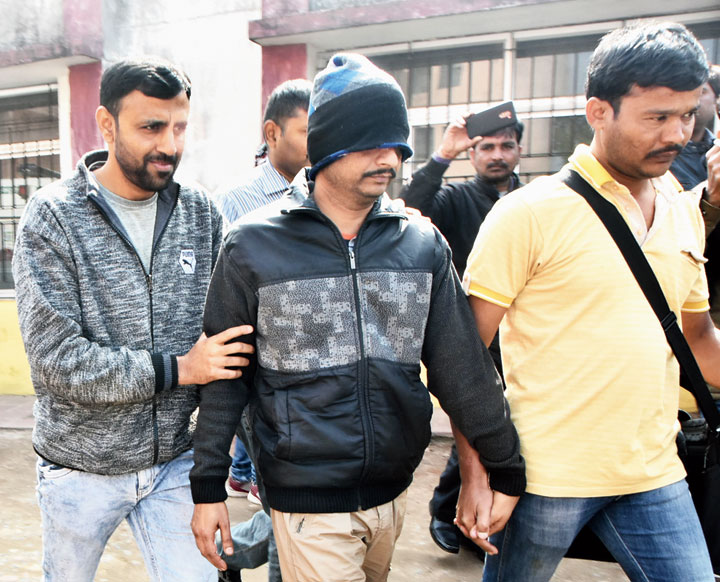 Rajesh Devdikar being taken to Dhanbad court from PMCH, where he underwent a medical test, on Friday.
Picture by Gautam Dey
Praduman Choubey   |   Dhanbad   |   Published 10.01.20, 06:47 PM

A Bangalore police team with help from their Dhanbad counterparts arrested from Katras on Thursday night a man who is an accused in the murder case of journalist Gauri Lankesh.

Lankesh, editor of Kannada weekly Lankesh Patrike, was shot dead outside her house in Rajeshwari Nagar in Bangalore on September 5, 2017.

The SIT took Devdikar, a native of Aurangabad in Maharashtra, to Bangalore after producing him in the court of Dhanbad chief judicial magistrate Arjun Sao on Friday and obtaining four days of transmit remand.

Devdikar, 44, whose name was in the charge sheet filed in Lankesh’s murder case, was working as a caretaker at Khemka petrol pump of Katras for over one year and lived in a rented house in nearby Bhagat Mohalla.

Police sources said literature related to the Sanatan Sanstha, a rightwing organisation whose name has also cropped up in the probe into the August 2015 murder of Maharashtra-based rationalist M.M. Kalburgi, was found from the room of Devdikar.

“The accused of the Gauri Lankesh murder case was living in Dhanbad for several months and was a resident of Aurangabad in Maharastra,” Dhanbad senior superintendent of police Kishore Kaushal told reporters on Friday.

A woman who lives next to the house where Devdikar lived in Bhagat Mohalla said: “He was living here since for more than 15 months but we never suspected anything and never ever imagined that he was an accused in such a high-profile murder case. We couldn’t believe our ears when we heard about his arrest last night from our locality.”

Another neighbour of Devdikar said: “Though he used to rarely interact with the members of the locality but during the few interactions he had he had said that he was married and father of a 15-year-old girl. He, however, never visited his hometown in the 15 months of stay here and always remained confined to his room after returning home from work.”

Uttam Mukherjee, manager of Khemka petrol pump, said Devdikar never aroused any suspicion. “We never suspected anything wrong from his activities as at the workplace as he used to do his duty very professionally,” he said.