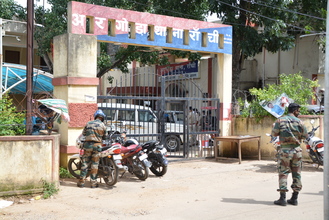 The state government on Monday allocated Rs 33 lakh for all districts to   procure Covid safety kits for policemen, over 60 of whom have been getting infected in the line of duty.

According to a statement from the state police headquarters on Monday evening, so far 66 policemen of various ranks had contracted the virus. Many have recovered too. However, it added that Rs 33 lakh was being sanctioned for all SPs for the purchase of safety gear, like gloves, PPE kits and masks.

Among those infected were a DSP rank official, an inspector, five sub-inspectors, nine assistant sub-inspectors, six constables, 32 jawans/drivers, one fourth grade employee and seven home guards. “Four personnel have so far been declared recovered,” said a statement from the police department.

The police department has also issued a nine-point advisory to policeman specifying dos and don’ts while discharging their duties to maintain law and order in the state. Among the suggestions was maintenance of social distancing, use of masks, regular use of sanitisers, avoiding consumption of tobacco and spitting, mandatory 14-day quarantine after returning from leave and minimum physical contact with people.

“While taking accused to jail, special precautions should be maintained and vehicles should be regularly sanitised along with the workplace,” read the statement.

It urged police officers to use citizen portals, online mediums and Whatsapp for lodging cases.

Notably, in the last one week, over a dozen police stations across the state, including six in Ranchi, have had to be sealed after cops tested positive for the coronavirus.