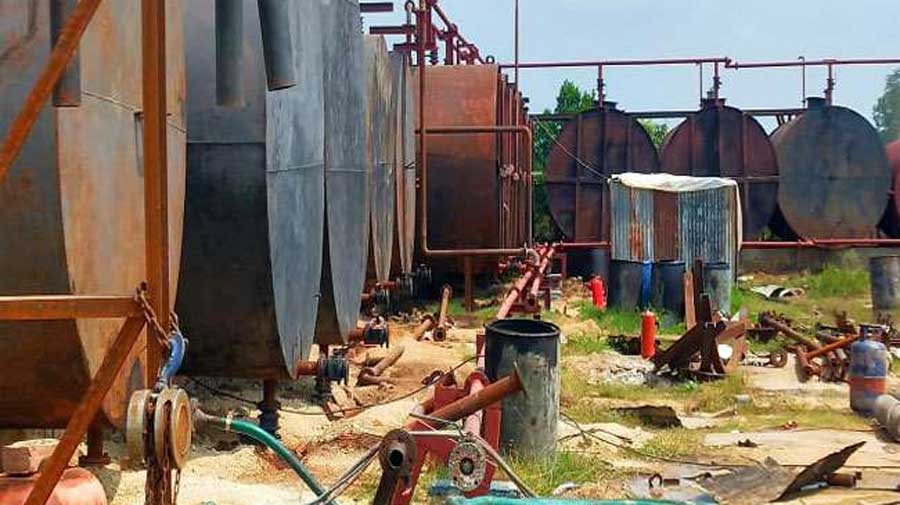 Four persons were grievously hurt in a cylinder blast at a chemical factory in Koderma on Tuesday. They have been referred to the Rajendra Institute of Medical Sciences (RIMS).

The workers were welding a tanker that had been lying unused outside the factory when the cylinder exploded.

A police team reached the spot and arrangements were made for the injured to be sent to the Sadar hospital. Since the burns were serious, they were referred to the Ranchi hospital.

The factory authorities feel that a short-circuit is to blame for the explosion. Manager Amrendra Jha said the injured worked for a contractor of the factory.

Two groups of transporters on Tuesday clashed with each other at Sindri More on the Nirsa-Jamtara road, about 40km from the Dhanbad district headquarters, after one of the groups called a bandh.

Police had to baton-charge the crowd to bring the situation under control.

One of the groups was protesting Maithon Power Ltd awarding a contract to the rival group.

A Dhanbad court on Tuesday allowed former Jharia legislator Sanjeev Singh, who is incarcerated, to transfer the power of attorney of his property to a relative. The transfer of property had been opposed by his cousin, Abhishek Singh Singh, alias Guddu Singh.

The court also instructed the sub-registrar to visit Dhanbad jail to facilitate the transfer of power of attorney.

Sanjeev Singh is lodged in Dhanbad divisional jail since his arrest on April 11, 2017, in connection with the murder of his cousin, Niraj Singh.

As many as 168 people tested positive for the coronavirus during a special rapid antigen test (RAT) drive conducted by the Dhanbad administration on Tuesday at 20 spot across the district, including at IIT (ISM), BIT Sindri, Central Institute of Mining, various BCCL hospitals and community health centres. A total of 8,177 people were tested.

A similar drive was conducted by the district administration on September 5, during which 107 people tested positive.

Trade union leaders under the banner of Sanyukt Sangharsh Samiti on Tuesday staged a protest at the Chasnala office of Steel Authority of India Ltd (SAIL) in support of their eight-point charter of demands, including pay revision of regular employees and implementation of equal pay for equal work for contractual workers.

A minor boy has been detained after a 14-year-old girl studying at a Palamau residential school for the disabled became pregnant.

The boy, who is being held under the Pocso Act, is also an inmate of the school.

Police detained the boy after the father of the girl lodged a complaint on Tuesday.

A 21-year-old man has been arrested for allegedly raping a minor girl after promising her marriage in the Ranka police station area.

The man, identified as Arbind, has been remanded in judicial custody for two weeks.

The crime came to light recently when the 17-year-old girl found out that she is pregnant.

A case under Section 4 (aggravated sexual assault) of the Pocso Act and Section 376 (rape) of the IPC has been registered by the Ranka police.