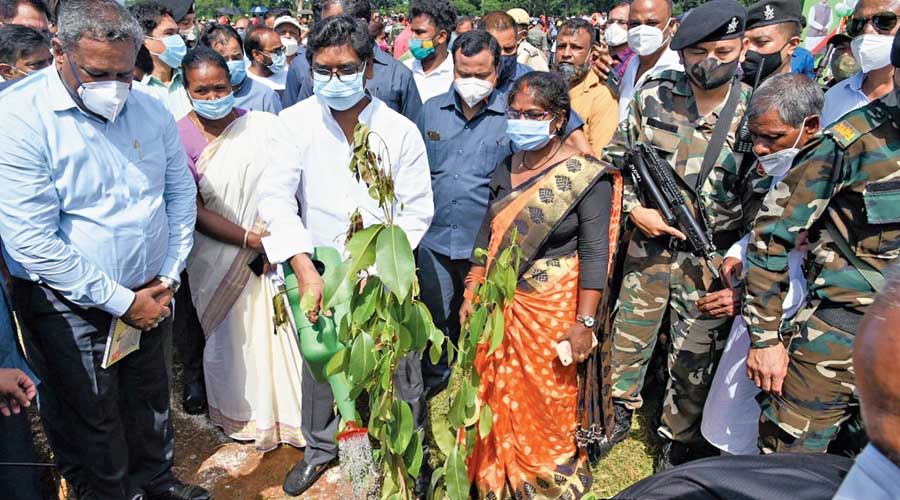 Over 5 lakh trees were planted, including over a lakh in Ranchi, on Tuesday during the 72nd Van Mahotsava (forest festival) organised by the Jharkhand forest department.

Sources in the state forest department said that this was the highest target of trees planted on a single day since the creation of Jharkhand during the Van Mahotsava, an annual tree planting festival celebrated in July across the country to spread awareness on forest conservation and environment protection.

Additional principal chief conservator of forest (APCCF) Jharkhand N.K. Singh said that since the creation of Jharkhand (2000) the state forest cover has increased by 1,625 sq km.

“As per the latest Indian State of Forest Report-2019 (a biennial exercise) Jharkhand forest cover had increased by 65sqkm and since the creation of the state our forest cover has increased by 1,625 sq km. We had set a realistic target of planting over 5 lakh trees across all 24 districts of Jharkhand with 1 lakh only for Ranchi on Tuesday. We would ensure that the trees planted are protected and nurtured too,” said Singh, who is also the managing director Jharkhand State Forest Development Corporation (JSFDC).

Nearly 34 per cent of the state area is covered with forest and the department has set a target of planning 1 crore 65 lakh saplings in 2021.

Chief minister Hemant Soren, who was the chief guest during the van mahotsava programme at Angara Block in Ranchi after planting a sapling on the banks of Subernarekha river at Gandhigram, said the state forest department will try to plant trees on all vacant and barren government lands.

“The forest department will be planting saplings on vacant government lands and also distribute fruit bearing saplings for plantation to those interested so that they are made aware about important of environment. There is need to increase green cover in the city along with infrastructure development,” said Soren.