Advertisement
Home / Jharkhand / First phase of Harmu river revamp almost over, nothing to show for it

First phase of Harmu river revamp almost over, nothing to show for it

Where Rs 81 crore of your money went 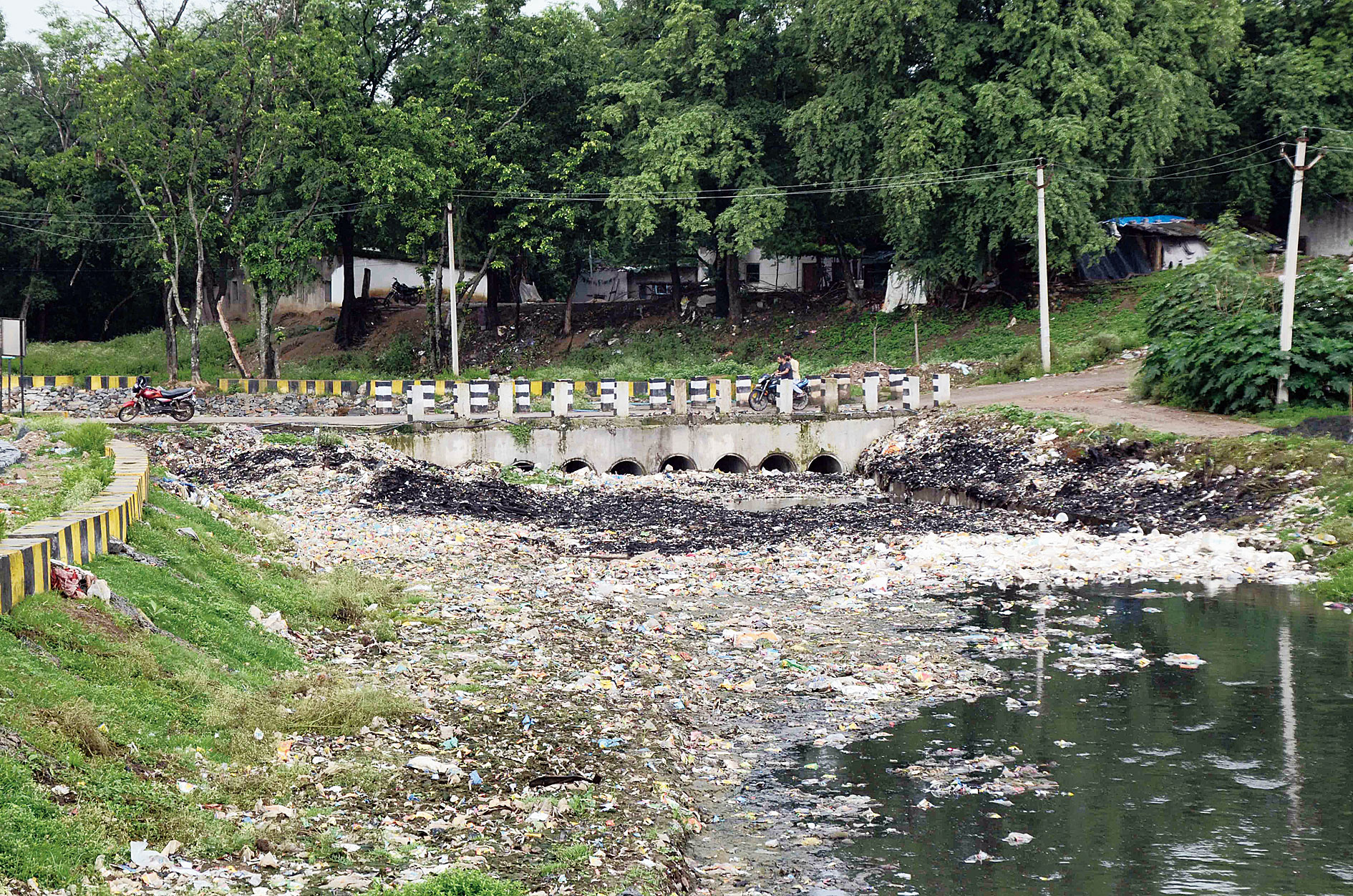 Polythene bags, styrofome utensils and other garbage float on the Harmu river at Kadru in Ranchi on Tuesday.
Picture by Manob Chowdhary
Our Correspondent   |   Ranchi   |   Published 30.07.19, 09:03 PM

A woman rag-picker was picking plastic bottles, polythene packets and other trash from the sludgy riverbed of Harmu river in Kadru on Tuesday, the stink of the black water enveloping the busy road.

It is difficult to imagine that the state government has already spent Rs 81 crore out of Rs 85 crore earmarked for the first phase to renovate this river, a task undertaken by Jharkhand Urban Infrastructure Development Company (Juidco), an arm of the state urban development department. The river, a glorified drain, was dubbed “dead” by Jharkhand High Court Justice S.N. Pathak a fortnight ago.

But barely a kilometre away from Kadru, state urban development secretary Ajoy Kumar Singh on Tuesday along with officials of the department and Juidco took part in planting saplings at Tapovan, again on the banks of the Harmu river, and discussed the second phase of the rejuvenation project that’s likely to start in August.

Singh said the state government had decided to plant as many as 15,000 saplings on the 10.5km stretch of the river to protect the water and the environment. “Consulting and construction companies associated with the Harmu river project will be responsible to protect the saplings once they are planted,” Singh said and directed officials to hold regular meetings with residents who live near the river to ensure they are involved too and don’t pollute the river. He also directed Juidco to put iron nets on the flanks of the bridges so that garbage is not thrown in the river.

Amid the plethora of directives, it was not hard to miss Juidco had not even done Harmu’s basic clean-up till date. Team Telegraph on Tuesday morning found the river choked at several points with plastic bottles, thermocol plates and polythene bags.

Asked, a Juidco official said they surveyed 2,000 households close to the banks of the river and a number of nearby colonies, built seven sewerage treatment plants and diverted many drains directly flowing into the river.

“But over the years, the number of settlements increased and many more drains got linked to the river,” he said.

“The first phase of the work is complete a technical team comprising experts from BIT-Sindri, BIT-Mesra and state public health and works department have inspected it. Once we get the panel’s report, we will be able what else is further required and what we lacked,” the official said.

An Ranchi Municipal Corporation official told this paper that despite everything, the river was dirty. “Last month, RMC asked the state urban development department to clean the choked Harmu river. It is Juidco’s job. The situation is very bad and an urgent clean-up is needed. But we don’t know why Juidco is not interested,” the senior RMC official remarked.

Juidco had its own set of excuses. A senior official of Juidco associated with the river project said it was technically impossible to clean the entire stretch till a proper plan was worked out. “Removing garbage from a couple of places is no solution. The river has become Ranchi’s dustbin. People dump garbage in the river, drainwater flows into it, these are the bare facts.” An official on the condition of anonymity alleged that the river rejuvenation project conceptualised in 2015 had a hastily prepared DPR but did not elaborate.

In the second phase, more sewerage treatment plants are set to come up and more drains diverted from the river. A solid waste management plant is also expected. But the Juidco official, who’d claimed the DPR was made in a hurry, said: “It will take at least a decade to rejuvenate this river.”