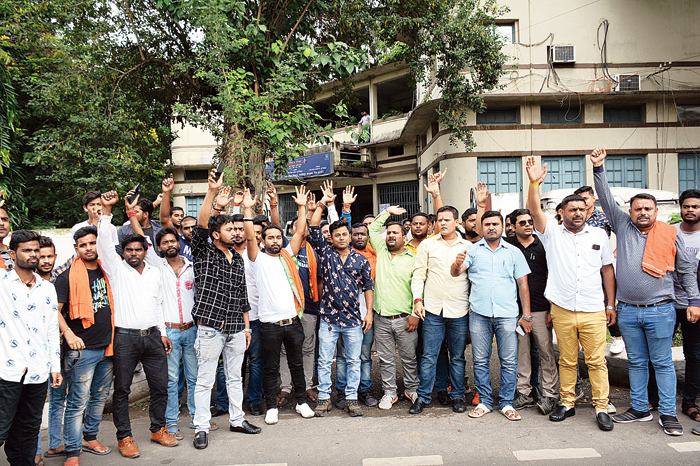 Rightwing groups on Wednesday jumped to virtually discipline a reputable English-medium school’s disciplinary action against some Class XII students who on Tuesday allegedly bunked class and chanted “Jai Shri Ram” in the corridor.

The ICSE-affiliated Church School, Beldih, neither denied nor confirmed that the 17 students, including two girls, were chanting “Jai Shri Ram”, but sent all of them home on Tuesday on a “weeklong study leave” that parents and rightwing group Shiksha Satyagraha and the ABVP, the students’ wing of the RSS, termed as “suspension”.

The school, in a written statement to the district administration on Wednesday, clarified it never suspended any student.

“This is to state that no student has been suspended from our school,” the statement said. “The students were bunking a library class and they were asked to call their parents.”

The statement went on to stress that the step was taken in students’ interest “to inform the parents about their child’s activities in school” because they had their board exams soon.

Principal Lillian Peterson did not speak to the media, and school sources said the management wanted no more controversy.

Parents told the media that the school authorities had asked the students to resume classes from Thursday.

However, some 70 members of the Shiksha Satyagraha, a self-styled education outfit founded by BJP member Ankit Anand, and 50-odd members of the ABVP said they objected to the way the school had “punished the children for chanting Jai Shri Ram on campus”.

“The school follows a particular religion; why can’t they respect others’ religion?” Anand told the media, adding that they had informed education officer Shivendra Kumar and superintendent of education Vineet Kumar.

Anand added: “Schools say that they are secular and teach their students to respect all religions, so why do we come across these incidents? I know that as students they shouldn’t have shouted slogans in the school corridor. But, instead of being sent home, the students could have been counselled properly. What was the point of sending them home on a so-called study leave? The school only didn’t use the term suspension.”

ABVP members also met principal Peterson to express their “displeasure” over the school’s handling of the event.

An AVPB member said school authorities could have spoken to the students instead of carrying the matter so far.

A parent, who did not want to be named, said the students were chanting “Jai Shri Ram” in a “spirit of fun” and “among themselves”.

“This is a sensitive time, because the students are in Class XII and have their pre-boards and boards,” the parent said. “It (the chanting) was blown out of proportion.”

Asked if parents had informed rightwing groups about the incident, the parent was evasive. “Someone must have.”

DEO Shivendra Kumar said they were going by what the school said in writing. “First, it’s an internal matter of the school. Second, when the school has said in writing that students have not been suspended, there is no room for further discussion. I hope things calm down soon,” he said.