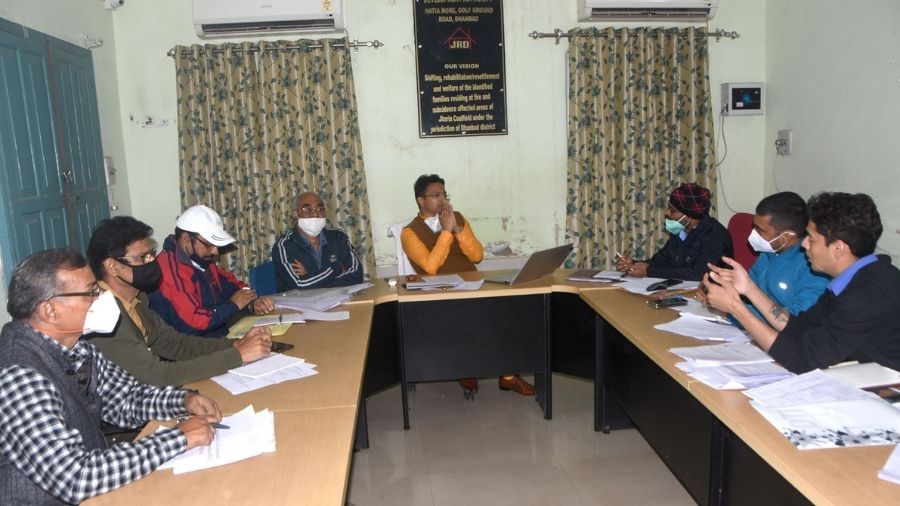 Deputy commissioner Uma Shankar Singh and others at the meeting at JRDA office in Dhanbad on Friday.
Picture by Gautam Dey
Praduman Choubey   |   Dhanbad   |   Published 22.01.21, 10:13 PM

A team of experts from coal town on Friday briefed the Managing Director of Jharia Rehabilitation and Development Authority Uma Shankar Singh regarding the similarities and differences between the Polavaram Rehabilitation project and Jharia Master plan.

The eight-member team recently returned from West Godavari district of Andhra Pradesh after carrying out an on site inspection and study of Polavaram Dam rehabilitation project.

The team comprising five members of the implementing agency of Jharia master plan, Jharia Rehabilitation and  Development Authority (JRDA) and three members of  Bharat Coking Coal Limited (BCCL) also made a presentation before Singh, highlighting the USPs of the Polavaram project.

Singh, who is also the Deputy Commissioner of Dhanbad, will also conduct a meeting with Smart City Ranchi project officials on Saturday. On January 27, he will meet top officials of the Centre looking after the Jharia Rehabilitation plan.

Talking to the media after Friday’s meeting, Singh said, “We discussed all sorts of issues to prepare a comprehensive rehabilitation plan which is acceptable to all.”

An open session of DC Uma Shankar Singh and BCCL chairman, Gopal Singh was held with the residents of 595 underground fire affected sites on January 16 at the new hall during which their suggestions, apprehension and concerns were enlisted.

“We also discussed the ways of initiating the rehabilitation work at the earliest and steps required to accelerate the land and fund transfer process for expediting rehabilitation from 595 underground fire affected areas,” he added.

A new livelihood plan with  provisions of all basic facilities at the new place will be linked.

Divulging more details, Resettlement in Charge of JRDA, Guljar Anjum, who was present at the meeting said, “The district team during the study of Polavaram Dam found various similarities between the Jharia master plan and Polavaram Dam rehabilitation plan. Both the places the displaced people are being provided houses built on land. The major difference was that while all beneficiaries of the Polavaram dam project are rural and dependent on agrarian income, here 90 per cent of people depend on coal production-related work.”