MP and former Union minister Kanimozhi Karunanidhi condemned the arrest of the Father, who was born in Tamil Nadu 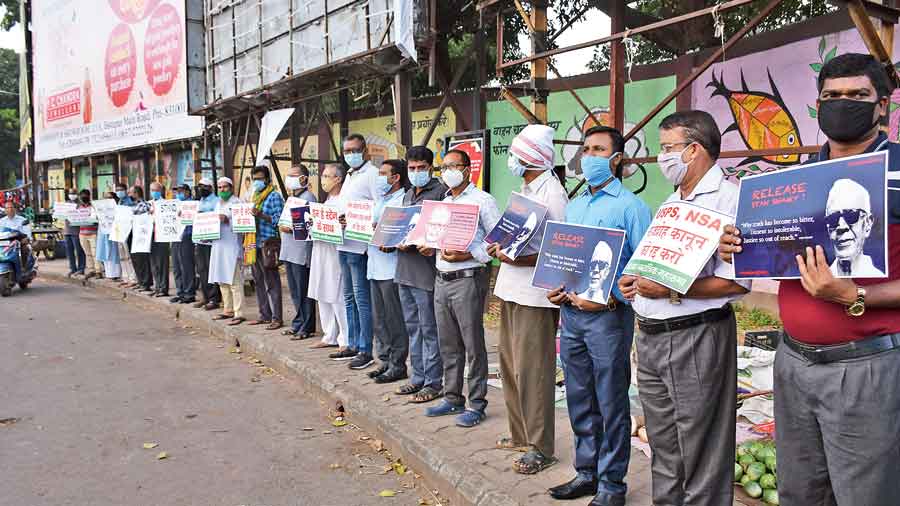 Members of rights organisations and activists form a human chain at Sakchi in Jamshedpur on Friday condemning the arrest of Father Stan Swamy
Bhola Prasad
Animesh Bisoee   |   Jamshedpur   |   Published 20.10.20, 01:08 AM

Support continues to pour in from Opposition MPs along with social outfits and tribal activists for the release of octogenarian Jesuit priest and tribal rights activist Father Stan Swamy, arrested by the NIA earlier this month near Ranchi for alleged Maoist link and involvement in the Bhima Koregaon case.

DMK MP and former Union minister Kanimozhi Karunanidhi, who attended a meeting organised by Christian Rights Movement at Santhome High School in Chennai on Sunday, condemned the arrest of Fr Swamy, who was born in Tamil Nadu.

“Father Stan Swamy has been imprisoned on false accusation. The Jesuit priest has been agitating for the rights and welfare of the Adivasis of Jharkhand state and also demanding the withdrawal of the cases registered against them. He should be released,” Kanimozhi tweeted on Sunday night.

Another Tamil Nadu MP, Karti Chidambaram of the Congress, in a tweet on Monday morning expressed concern over the 83-year-old Fr Swamy’s arrest.

“The arrest of Father Stan Swamy is a cause for grave concern. I condemn the arrest and support the demand for his immediate release. Fr Stan Swamy has spent most of his life as a fierce defender of the rights of Adivasis and their land, labour and resources. The NIA appears to have given no consideration to any of this, or to his advanced age and multiple health complications, including Parkinson’s Disease. The arrest is a reminder of the grave dangers of the Unlawful Activities (Prevention) Act, whose capacity to centralise and override is eroding federal independence and personal liberty,” said Sivaganga MP Karti.

“Father Stan Swamy has vehemently opposed the allegation that he had a hand in the violence in Bhima Koregaon, a place he claims never to have even visited. The series of arrests around the Elgar Parishad-Bhima Koregaon case have targeted activists and intellectuals who have raised voices for tribals and marginalised them. Through the UAPA they are being treated as terrorists. We hope that immediate steps would be taken to stop such acts against the basic values of our democracy and release Father Swamy,” wrote Tirkey.Rights advocate Mihir Desai, the legal counsel for Fr Swamy, told The Telegraph on Monday that his bail petition would be heard by the special court in Mumbai on Tuesday.

“It is an interim bail petition by Stan Swamy on medical grounds and would be taken up for hearing tomorrow,” Desai said.

Sources said the bail plea referred to the guidelines given by the Maharashtra government’s high-powered committee appointed on the directions of the Supreme Court recommending decongestion of jails during the pandemic and also states Fr Swamy’s susceptibility to the virus given his age and other health conditions.

Fr Swamy, who was arrested on October 8 from his residence in Namkum in Ranchi and taken by the NIA to Mumbai, is currently under quarantine in judicial custody at Taloja Central Jail in the Maharashtra capital till October 23.