OPDs to remain shut in 5 other medical colleges, senior residents to meet health minister on Thursday 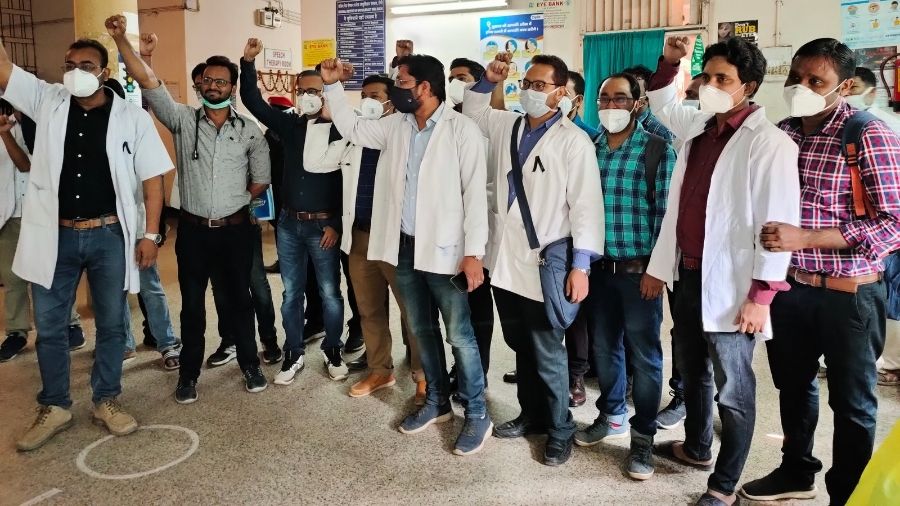 Doctors raise slogans at Rajendra Institute of Medical Sciences (RIMS) in Ranchi on Wednesday on the second day of their strike to demand salary arrears as per the Seventh Pay Commission. By the evening, RIMS doctors decided to call off their strike after talks with the hospital director and the state health secretary.
Picture by Manob Chowdhary
Our Correspondent   |   Ranchi   |   Published 10.03.21, 04:55 PM

Junior resident doctors of Rajendra Institute of Medical Sciences (RIMS) called off their strike on Wednesday following a closed-door-meeting with the Director Dr Kameshwar Prasad, but their counterparts in the remaining five medical colleges of Jharkhand continued with their strike to demand payment of pending salary dues as per the Seventh Pay Commission.

Representatives of senior resident doctors in Jharkhand are likely to meet health minister Banna Gupta on Thursday, sources said, in the hope that statewide protest would end after adequate assurances from the state government.

Earlier, hundreds of patients were denied OPD services at the six medical colleges across Jharkhand for the second consecutive day on Wednesday, leading to panic and chaos at some of the leading healthcare facilities in the state as resident doctors continued to boycott OPDs as a part of their indefinite strike against delay in payment of arrears as per the Seventh Pay Commission.

Only patients in need of immediate medical attention were treated at the emergency ward in RIMS, while those with minor ailments were asked to wait.

The Indian Medical Association (IMA) extended its support to the protesting doctors and addressed a letter to chief minister Hemant Soren seeking payment of arrears to the resident doctors at the earliest. The letter, addressed by Jharkhand IMA chief Dr Arun Kumar Singh, stated that the government should take necessary steps to pay the arrears of the protesting doctors as soon as possible.

Such protests created a bad image of the state nationally, it said. “As a result of such protests, doctors from other parts of the country do not show intent to work in Jharkhand, and those working here end up leaving the state. If doctors develop a negative idea of Jharkhand, then it will eventually affect the functioning of the six medical colleges in the state,” the letter, a copy of which is with The Telegraph Online, stated.

The protesting doctors have alleged that they were not paid salary as per the Seventh Pay Commission since 2016 to March 2019. There are more than 500 resident doctors in Jharkhand. On an average, each doctor is entitled to payment of arrears worth several lakhs, they clamed.

The doctors’ strike also rocked the state Assembly on Wednesday. The Opposition staged a demonstration outside the Assembly demanding payment of arrears to the resident doctors and strengthening of health facilities in the state.