Diwali diyas made by special athletes a big hit already

Jeevika's untiring efforts pay off as demand soars, orders pour in to steel city from Ranchi, New Delhi and Hyderabad 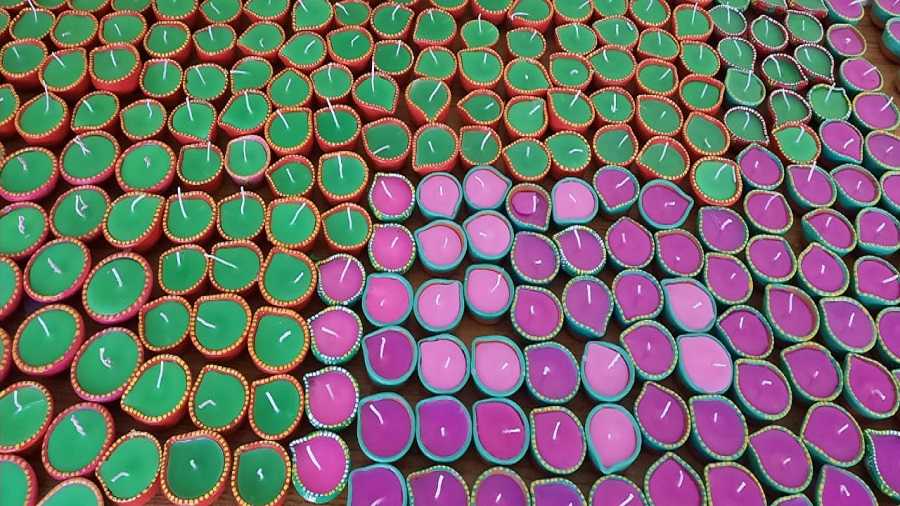 Diwali diyas modelled and painted by students of a school for the  intellectually impaired are selling fast in the run-up to the festival of lights on November 4.

Students of Jeevika, a Jamshedpur-based NGO working for the welfare of special children and adults, have modelled and painted about 8,000 diyas. Buyers for the diyas are not only from the steel city but also from Hyderabad, New Delhi and other cities.

Jeevika founder Avtar Singh said over 40 per cent of diyas have already been sold and enquiries were pouring in every day. "Our students (read special athletes) worked hard and came up with these beautiful diyas. The diyas are being despatched from our NGO in Sonari. Some of the orders have already been packed and ready for despatch. We'll also put up stalls at our school for selling diyas," he added.

According to Singh, a seven-time national cyclist who led the India cycling team in the 1982 Asian Games in New Delhi, friends of buyers living in the steel city have been asked by their acquaintances in New Delhi and Hyderabad to collect the diyas from us and despatch them. Outstation buyers pay money through digital means," he said.

The special athletes, some of whom are national and international medal- winners, modelled and painted the diyas at their homes during the pandemic. The clay diyas were procured from a potter in Asanbani in East Singhbhum. The diyas were brought to Jeevika and were subsequently distributed to the special athletes at their home. The intellectually impaired completed varnishing and subsequently painted the diyas.

Students of Jeevika also worked on the diyas at their school (Jeevika) when the Covid situation improved. They also poured wax in the diyas, price of which range from Rs 5 to Rs 150 each.

Ganga Bai, Akash Sharma, Ankit Mukherjee, Ryan Francis and Pankaj Kumar remained busy for about four hours daily at the Jeevika centre. They are assisted by Anuradha Kumari, a temporary staffer of Jeevika.

Beside diyas, special students have also worked  on decoration pieces as well as  eco-friendly bags The diyas – in various shapes and sizes, the most unique being the turtles – are a hit among people of Jamshedpur and Ranchi. The diyas invariably get exhausted much before Diwali.

Ganga Bai, who won a gold and two silver medals at the Special Olympics International World Summer Games in Athens, Greece, in 2011, said she was happy to be working on the diyas. “Mujhe painting karna bahut pasand hai. Khush hu ki hamare  dwara banaya gaya diya ki achhi maang hai (I love painting. Happy about diyas made by us has a good demand),” she said.

Three of Ganga Bai's paintings had featured in the 2016 annual calendar of Tata Steel.

The intellectually impaired also stand a chance of getting cash from the special school after Diwali. “We have plans to recognise the toil of our students. Their hard work and patience should be recognised,” said Singh.