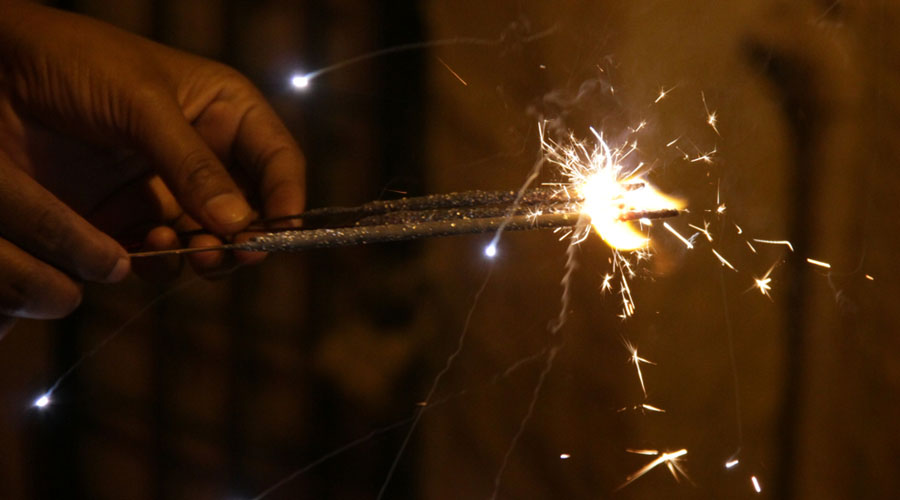 Normal crackers with a maximum noise level of 125 decibels will be allowed but during the same window period for bursting.
Shutterstock
Our Correspondent   |   Ranchi   |   Published 12.11.20, 05:26 PM

Bursting of crackers during Diwali and other subsequent festivals this year will be allowed only for two hours during the night, the Jharkhand State Pollution Control Board (JSPCB) on Thursday notified the order in view of the National Green Tribunal’s diktat to all states amid the ongoing Covid-19 pandemic.

Only green crackers will be allowed in select districts which had recorded moderately high air pollution levels in 2019. The districts included Ranchi, Ramgarh, Bokaro, Palamau, East Singbhum, West Singhbhum, Seraikela-Kharasawan, Hazaribag, Giridih, Dhanbad, Deoghar, Godda, Pakur and Sahebganj. “In these districts, only green crackers are allowed for sale, and bursting can be done between 8 pm – 10 pm. In the rest of the districts where pollution levels were within the limit, normal crackers with a maximum noise level of 125 decibels will be allowed but during the same window period for bursting,” he said, adding that anyone violating the directives will be liable for action under section 188 of IPC and section 37 of the Air Pollution Act, 1981.

Two days ago, the state government notified the ban on crackers in public places during Diwali in the wake of the Covid-19 pandemic following concerns raised by the medical fraternity of possible health complications which could trigger because of air pollution due to crackers with the onset of winter.

The state chapter of Indian Medical Association (IMA) had in fact demanded a complete ban on crackers this year. Dr. AK Singh, state president of IMA welcomed the move. “Limiting time frame for the bursting of crackers will help in controlling air pollution but the challenge lies in its effective enforcement across the state,” said Singh.

Another doctor of Rims on anonymity, however, said that the move came very late. “By now, many had already bought crackers and the order banning the sale of non-green crackers in few districts is just eyewash. The order should have come weeks ahead of the sale of crackers. Also, how will administrations enforce a two-hour window? Already, the sound of crackers is ruling airwaves everywhere in the city, which is proof enough of everyone stocking sufficient stocks of fireworks. Let’s hope for the best,” he said.