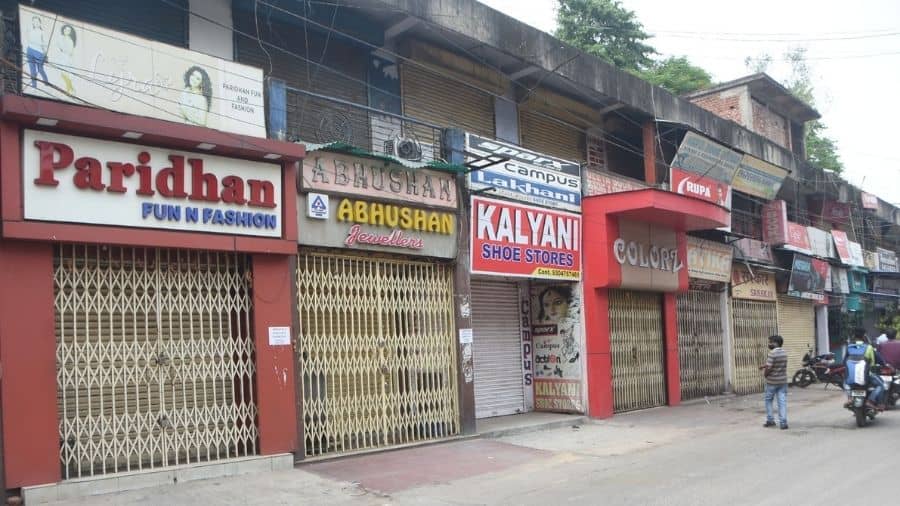 Dhanbad traders have demanded for more relaxations in the state's Unlock 2 programme beginning from June 10 by tweeting to Chief Minister Hemant Soren, in view of the losses they have been facing due to the closure of several shops for months amid the Covid-19 lockdown in Jharkhand.

Officers of different trade organisations, in their tweets to Hemant, demanded permission for the opening of garment, footwear, jewellery and cosmetics shops from June 10 as well as an extension of working hours.

Shop owners are afraid that the curbs will continue for them during Unlock 2, owing to the grim situation in nine districts -- including Ranchi, Dhanbad and Jamshedpur -- that were kept under more restrictions during Unlock 1.

President of Bank More Chamber of Commerce, Prabhat Surolia in his tweet to the chief minister lauded the state government’s effort to control Covid but at the same time demanded permission for the opening of shops keeping in mind the livelihood of common people. He further demanded an increase in timings for trade-related activities.

Former President of Purana Bazar Chamber of Commerce Md Sohrab in his tweet asked for permission for reopening of garment, footwear, jewellery and cosmetic shops in nine districts of the state including Dhanbad everyday from June 10 till 5 pm.

“Due to closure of more than 50 days the financial conditions of the majority of garment, footwear, and cosmetic traders have deteriorated and they are gradually entering into a vicious debt circle,” claimed Sohrab who owns a garment shop in Purana Bazar. He said that street vendors selling readymade garments on carts are in a worse situation.

“The garment and footwear traders were the worst sufferers during the last lockdown as well since they were the last sector which was given permission to operate after more than five months,” Sohrab added.

Patron of Federation of Dhanbad Zila Chamber of Commerce and Industry (FDZCCI) Rajesh Kumar Gupta said, “As the active cases in the district have significantly reduced to 184 it is high time the government should open more shops and increase the timings but at the same time ensure strict monitoring of the following of Covid-related protocols.”