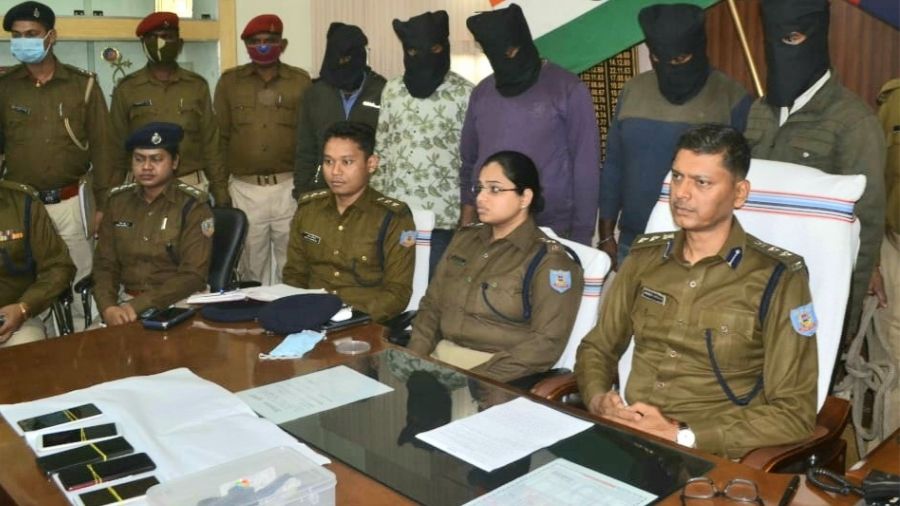 Acting tough against the regular complaints of extortion demand from Dhanbad traders in name of UP-based jailed shooter Aman Singh, Dhanbad Police today arrested five criminals of his gang who were plotting an unknown crime incident on his instruction from behind the bars.

Talking to the media at his office, Dhanbad SSP Sanjeev Kumar said, “The arrested persons belong to the Aman Singh gang and were in regular touch with him to plot crime incidents. We have lodged an FIR against altogether 15 persons including Aman Singh.”

“We have arrested altogether 19 members of Aman Singh gang earlier and as a result, the gang weakened in the area. Later, Singh hired some Katras born criminals who were presently operating from outside Katras in order to reassert his position,” said Kumar.

“Our team composed of both technical and field personnel who were closely monitoring their activities and arrested them after getting vital clues against them,” said Kumar and added that two criminals Asish Gupta and Ajay Kumar Singh were in regular touch with Aman Singh who was plotting crimes from behind jail.

“Rahul Gupta has also been lodged in Banka-based Bihar jail and was recently released while Nawal Sharma was involved in a truck loot case to Topchanchi,” divulged Kumar and added that the fifth person, Mukesh Rai went to several times earlier in arms act.

When asked how many traders have been threatened by the Aman Singh gang, Kumar parried the question and said “Though a few of traders approached the police, others didn’t inform. We will appeal to every trader to immediately seek police help in such cases.”

Notably, Aman Singh, a UP based shooter involved in the murder of Dhanbad Deputy Mayor Niraj Singh in March 2017, who was arrested by police from Mirzapur in UP on May 3, 2017, is involved in making extortion calls to over 50 traders, industrialists, and coal officials from behind the bars.