Owing to the lockdown, physical hearings have been closed for more than nine months 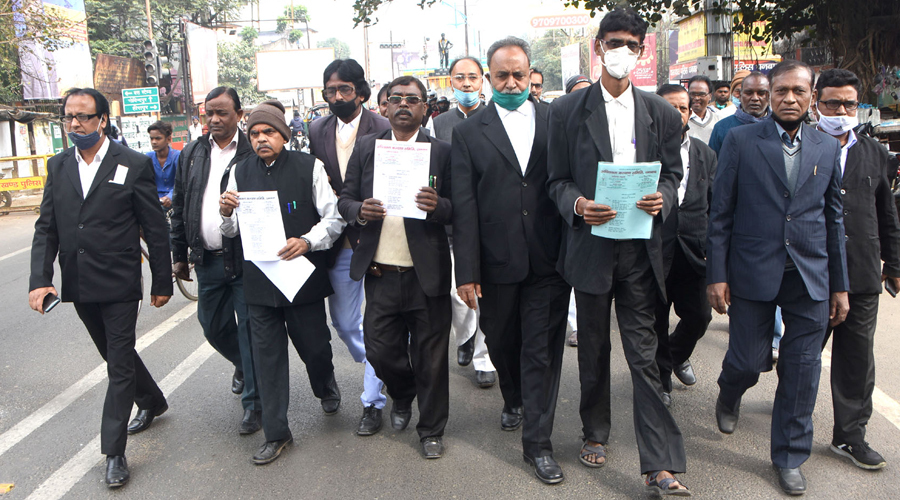 Lawyers of Dhanbad with the memorandum to open the court, on their way to hand over to the deputy commissioner of Dhanbad and CJM, Dhanbad on Monday.
Picture by Gautam Dey
Praduman Choubey   |   Dhanbad   |   Published 04.01.21, 08:20 PM

Facing pitiable financial condition due to closure of courts ever since the imposition of lockdown in March, more than 100 lawyers took out a footmarch on Monday from Randhir Verma Chowk to Dhanbad Court and submitted memorandum to the principal district and session judge of Dhanbad Basant Kumar Goswami.

The lawyers later also submitted a memorandum to the Dhanbad deputy commissioner, Uma Shankar Singh demanding resumption of physical court sessions. The copies of the memorandum have also been sent to registrar of Supreme Court of India and registrar of Jharkhand High Court.

Talking to the media at the sidelines of the footmarch, Dhaneshwar Mahto, Central President of Adhiwakta Kalyan Samiti under the banner of which the protest programme was organised said, “We are demanding resumption of physical court session which is closed for more than nine months.”

“The memorandum submitted to the principal district judge of Dhanbad would be sent to the High Court and Supreme Court and also the chairman of the Bar Council of India,” added Mahto, who is also the former vice president of Dhanbad Bar Association. The memorandum submitted to the deputy commissioner would go the chief minister, Hemant Soren, as well.

“We have also submitted a similar memorandum on June 3 last year to different concerned authorities but due to the severity of Covid situation majority of the institutions were closed then. The courts were not opened but as the situation has changed now and schools, colleges, market, train and other offices have opened up, we are demanding resumption of physical session of courts.”

“Not only lawyers but large number of litigants of remote areas are facing difficulty due to the closure of physical courts,” said Mahto and added that they would be compelled to sit on a dharna if no decision with regards to opening of courts is taken soon.

Echoing sentiments, Jubair Alam, a member of Adhiwakta Kalyan Samiti said, “The lawyers are facing great difficulty due to the closure of physical court as our livelihood after all is dependent on the court proceedings. If the physical court sessions will not be restored our condition is going to worsen further.”

“We are demanding resumption of courts with all safety measures like mandatory wearing of masks, used of sanitizers, maintaining of six feet of physical distance which is being practiced at all other offices and public places,” further said Alam.