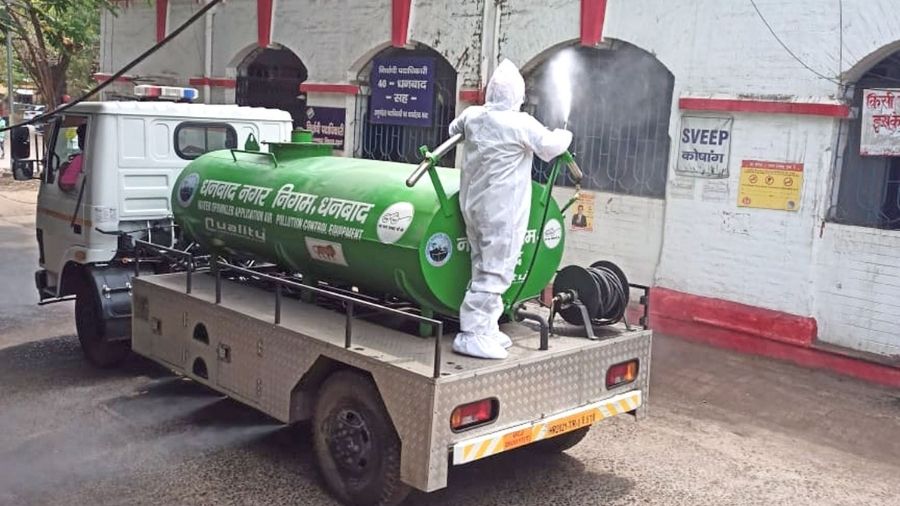 A worker sprays sodium hypochlorite solution from a tanker during the sanitisation drive in Dhanbad on Thursday.
Picture by Gautam Dey
Praduman Choubey   |   Dhanbad   |   Published 15.04.21, 07:31 PM

The Dhanbad Municipal Corporation has launched intensive sanitisation drive across 55 wards of the district, spread over five circles, including Jharia, Dhanbad, Sindri, Katras and Chhatatand, using an array of machines and vehicles.,

The water sprinkler machines loaded with sodium hypochlorite solution sanitised the Randhir Verma Chowk, Sadar Hospital Road, Sadar Hospital, SDM court and Civil Court areas as well as other prominent roads of coal town. On the other hand, eight tankers fitted with pressure machines were used on the main roads of the other four circles. Hand spray machines were used at narrow streets and congested areas, where heavy machinery cannot enter.

Dhanbad Municipal Corporation City Manager (sanitation) told The Telegraph Online that they have been sanitising the buffer and the containment zones of the district ever since the second wave of Covid-19 kicked in. “However, now we have extended the drive to all the 55 wards irrespective of the fact whether they are containment zones or not,” he added.

“PPE kits and other protective gears have been provided to our staff engaged in sanitisation works,” the official said.

Raj informed that the two water sprinkler vehicles were originally being used for coal dust suppression, but have now found a new role. The corporation has also purchased the sodium hypochlorite solution from a supplier this year, unlike the previous year where they used to make it on their own.

“This drive will continue everyday in different parts until the situation normalises in the district. We will focus on such places which witness greater footfall,” he said.