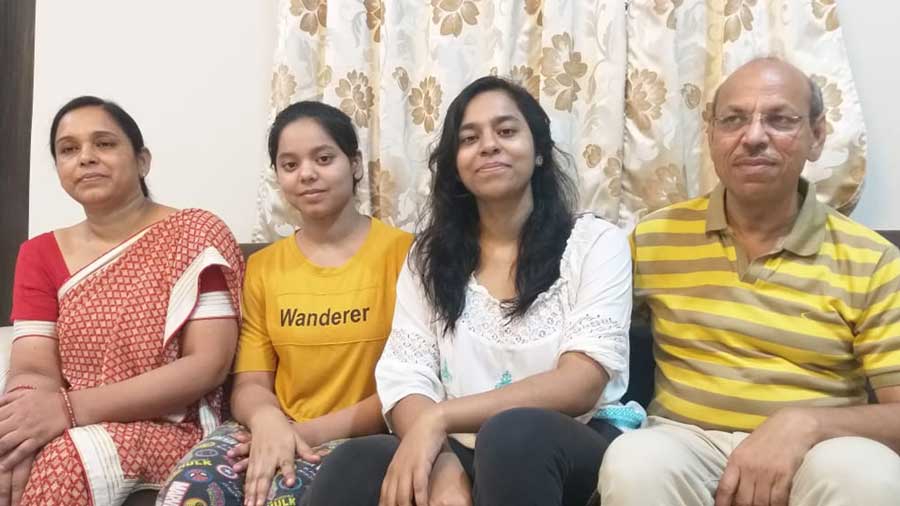 Dr Harsha Priyamvada (2nd from right) along with her family members at her residence in Dhanbad on Tuesday
Gautam Dey
Our Correspondent   |   Dhanbad   |   Published 04.08.20, 07:42 PM

In a proud moment for the district, Dhanbad-based doctor Harsha Priyamvada (25), who is the daughter of a renowned doctor couple, has clinched 165th position in the Civil Services exam conducted by the Union Public Service Commission (UPSC), the results of which were declared on Tuesday.

Talking to The Telegraph Online, Priyamvada, who did her primary education in Saraswati Vidya Mandir, Petarwar, said, “Hard work and smart work led to my success.” She completed her class ten exams from Carmel School Dhanbad in 2010 and 12th from Delhi Public School Bokaro in 2012

Not a fan of spending long hours studying, the UPSC 165th-rank holder was smart and focussed when it came to dealing with one of the toughest exams in the country. "Instead of counting hours of study in a day one should concentrate on output from the study, and that output can be gained in four-five hours only. It was my second attempt as soon after completing MBBS from Patna Medical College and Hospital (PMCH) in 2018 I appeared for the Preliminary exams of the civil services to just get a feel of the examination. I once again attempted it last year, and got success,” Priyamvada says.

She didn’t take months of coaching to crack this exam. “I took the coaching for two months after completing my internship at PMCH, Patna. But didn’t find it very useful so I prepared at home itself on my own. I took online tests instead,” the doctor said, her voice brimming with confidence.

On being asked why she chose UPSC when she could have also served the society as a doctor, she said, “They say that one can do better where his/her heart goes. I was interested in Civil Services since childhood so I decided to opt for it.”

Priyamvada’s parents are obviously over the moon. “My wife and I are delighted over our daughter’s success. She made us proud by clearing the examination for the top service of the country,” said an elated Dr Kumar.