Happy, says father who carried charred body of his daughter because no police was ready to help him 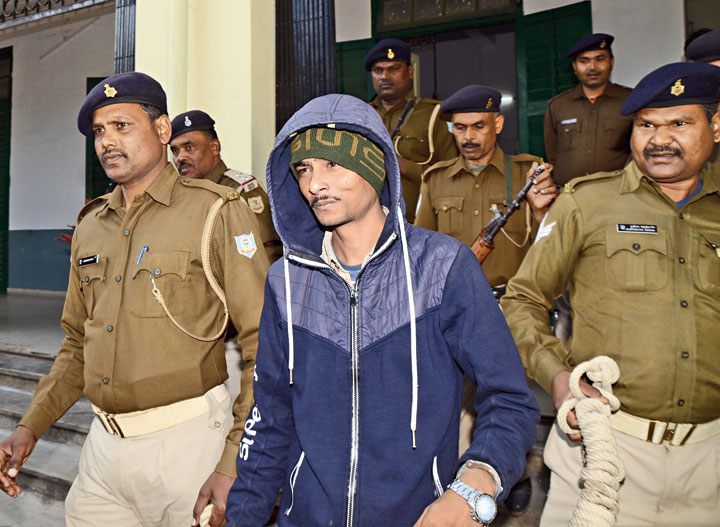 The CBI’s additional judicial commissioner XVI-cum-special judge Anil Kumar Mishra on Saturday awarded the death penalty to Rahul Raj, a resident of Bihar’s Nalanda district, who was convicted by the same court on Friday of the rape and murder of a 19-year old BTech student at her home in Booty Bustee in Ranchi on December 15, 2016.

The order came on Saturday morning around 11am in a jam-packed courtroom where the father of the victim broke down in tears.

The CBI court, however, directed the death sentence not be executed before Jharkhand High Court upheld it.

The defence lawyer added: “In the event the convict defaults on payment of fine in each section, he will be sentenced to one month simple imprisonment more for each. The sentences for imprisonment will run concurrently. The court directed not to execute the death sentence unless confirmed by Jharkhand High Court.”

The defence lawyer said they would now appeal against the lower court’s order before the high court. “I am not satisfied with the judgment and will make an appeal against it once I get a certified copy of the order from court,” he said.

Civil court lawyer Rahul Kumar, who was present in court, told The Telegraph that defence lawyer Singh pleaded strongly for leniency that the prosecuting lawyer of the CBI, Rakesh Prasad, took strong exception to.

“The defence lawyer pleaded for leniency in view of the convict being only 25 years old and with no criminal background. He said the case did not fulfil conditions laid down by the apex court for capital punishment. Senior public prosecutor of the CBI strongly protested against this, saying the convict committed a gruesome act in a pre-planned way that led to the rape and murder of the girl in her house in the dead of night,” the lawyer said.

The court, while declaring the quantum of punishment, declared the crime as “the rarest of rare” and cited many judgments of the high court and Supreme Court.

Referring to a Supreme Court judgment in Mukesh Vs State (NCT) of Delhi, 2017, the court in its judgment observed: “Where a crime is committed with extreme brutality and the collective conscience of the society is shocked, courts must award death penalty. By not imposing death sentence in such cases, courts may do injustice to the society at large.”

The court also cited an apex court judgment given in the 1994 case of Dhananjay Chatterjee Vs State of West Bengal. “In our opinion, the measure of punishment in a given case must depend upon the atrocity of the crime, the conduct of the criminal and the defenceless and unprotected state of the victim…Justice demands that courts should impose punishment befitting the crime so that the courts reflect public abhorrence of the crime...” the court observed.

The girl’s father, with tears streaming down his face, told mediapersons that he was satisfied with the order.

“I had full faith in the court and I was satisfied with the CBI probe. I still remember the day when I carried the charred body of my daughter on my shoulders when none of the policemen was ready to touch her. I won’t get my daughter back but I am happy that proper punishment has been meted out,” he said.