All three are men between the ages of 22 and 52, one each from Ranchi, Koderma and Hazaribagh 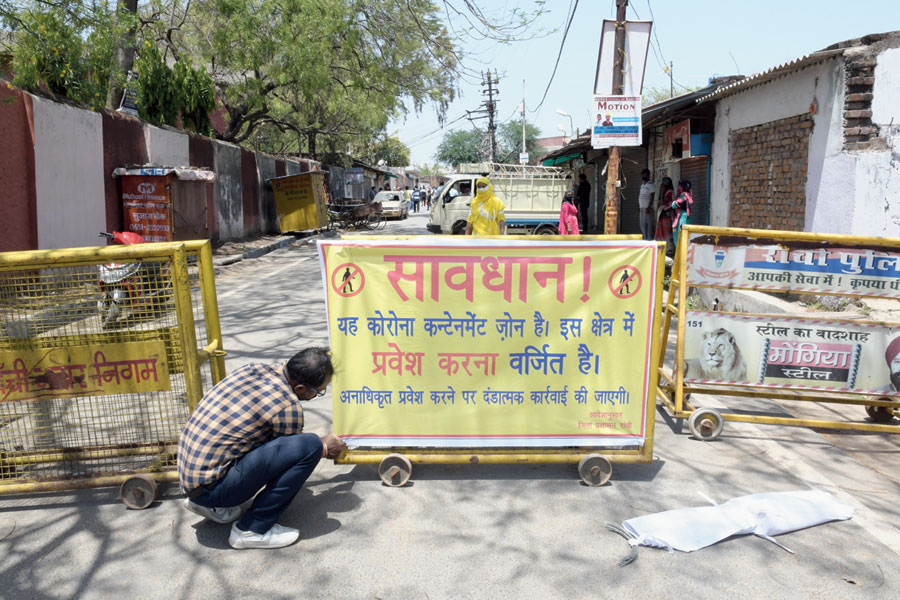 A district administration employee sticks a poster at Hindpiri in Ranchi on Saturday that bars people from the hotspot.
Picture by Prashant Mitra
TT Bureau   |   Ranchi   |   Published 11.04.20, 06:51 PM

Three new cases of the novel coronavirus were confirmed on Saturday, taking Jharkhand’s total number to 17.

All three are men between the ages of 22 and 52, one each from Ranchi, Koderma and Hazaribagh.

The patient from Ranchi is a 52-year-old man from densely populated Hindpiri, the ones from Koderma and Hazaribagh are younger, aged 22 and 35, and had returned from work in Mumbai.

With this new case, the number of coronavirus cases from Ranchi rose to eight from Friday’s seven, civil surgeon of Ranchi Dr Vijay Bihari Singh said.

Asked if he belonged to the same family which was in contact with the first confirmed case in Ranchi, a 22-year-old Malaysian woman, Dr Singh said no and added that this new patient’s contact history was being found out.

The Koderma youth had come from Mumbai to his native village Jahanadih, a bordering area of Koderma and Giridih districts, on March 23. The village falls in Rajdhanbad block of Giridih, some 60km from Giridih headquarters and 40km from Koderma district headquarters. The patient got treated by local village doctors in Markachho before he was taken to the local community health centre on April 3. The same day he was referred to sadar hospital, Koderma, for isolation.

Dr Prasad said the coronavirus positive patient had been shifted to the Covid-19 hospital, Holy Family, where a trained medical team would take care of him.

In Hazaribagh, the 35-year-old Covid-19 patient was working in Mumbai but returned to his village in Vishnugarh on March 23. Deputy commissioner Bhuvnesh Pratap Singh said this man was kept in the isolation ward at Hazaribagh Medical College and Hospital (HMCH) on April 7 from where his samples were sent for the coronavirus test. He said 14 others who were also living in this ward will now undergo tests as well as live in quarantine for 14 days now.

The DC said the man started his journey from Mumbai on March. 20. He reached Saria of Giridih on March 23 and on the same day reached his village in Kharika panchayat of Vishnugarh, some 65km from Hazaribagh district headquarters.

He said mukhiya of that area brought the man to Vishnugarh primary health centre on April 6. As the man had fever, he was immediately quarantined. On April 7, he was sent to the HMCH’s isolation ward.

On Thursday last, a 75-year-old Covid-19 patient in Bokaro breathed his last.