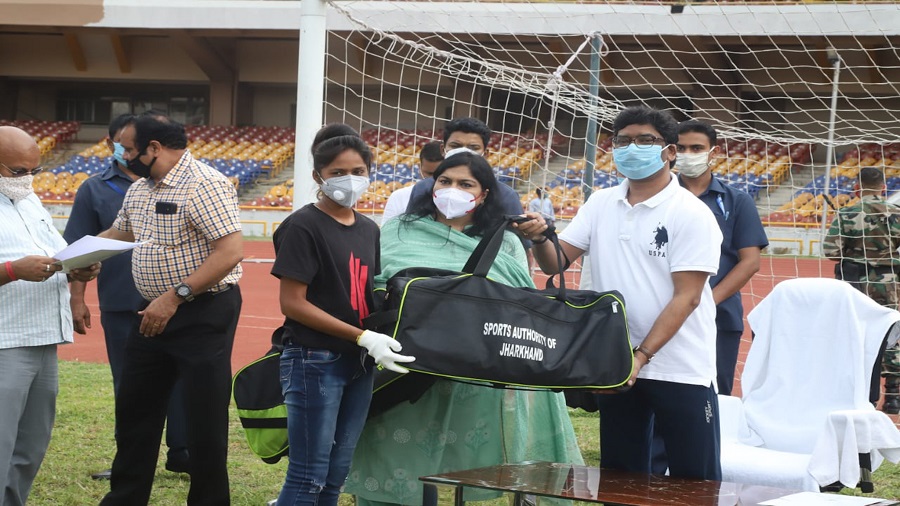 Chief minister Hemant Soren hands over a football kit bag with goodies to one of the players set to represent India in the U-17 Women’s World Cup at Morhabadi Stadium in Ranchi on Thursday
File picture
Achintya Ganguly   |   Ranchi   |   Published 01.08.20, 02:29 AM

A training camp for the probables of the Indian team for the Fifa Under-17 Women’s World Cup is likely to be held in the Jharkhand capital but the dates are yet to be finalised.

“The All India Football Federation (AIFF) agreed to our proposal for holding the training camp in principle but we are yet to receive its final nod on dates,” state sports director Anil Kumar Singh said on Friday, raising doubts if the camp would start in August as expected.

Altogether 35 footballers were selected from across the country, including eight from Jharkhand, as probables for the Indian squad.

The footballers were undergoing training in Goa since 2019 to prepare themselves for the World Cup but returned home when they were given a short break in February.

Though the players were supposed to return to the training camp by March-end, they couldn’t do so after the imposition of the nationwide lockdown to contain the spread of coronavirus. Subsequently, the training camp was postponed indefinitely.

The girls from Jharkhand stayed back at their respective villages where they were said to be not getting a proper diet and continued to practice with much difficulty.

After the media, including The Telegraph, highlighted their plight, Jharkhand chief minister Hemant Soren showed interest in hosting a camp for the girls in Ranchi where they could avail of better facilities.

Accordingly, the state government took up the matter with the AIFF and expressed its willingness to hold a special camp for the girls from Jharkhand and also a national training camp involving all the 35 probables.

Soren met the footballers and presented them sports kits. He also said that Jharkhand had the infrastructure for holding a national training camp for all the girls.

Meanwhile, the Jharkhand government extended the lockdown restrictions till August 31 with a provision of a two-week mandatory home quarantine on entering the state.

The decision made it apparent that the proposed national camp, if held in the state, could be hosted only after August.

India will host the seventh edition of the Fifa U-17 Women’s Word Cup that was scheduled to be held in November this year but has been shifted to February-March 2021 due to the pandemic.

According to the revised schedule, the tournament will now be held between February 17 and March 7 next year in Ahmedabad, Bhubaneswar, Calcutta, Guwahati and Navi Mumbai.

Besides host India, 15 other teams chosen through separate continental tournaments will participate in the World Cup.