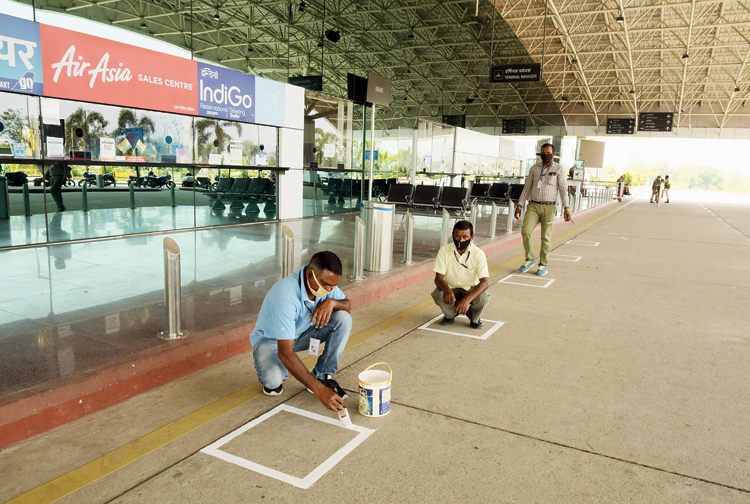 Birsa Munda Airport in Ranchi is readying to resume flights with contactless check-ins.

A high-level meeting was held on Wednesday at the airport between senior officials of Airports Authority of India (AAI), the Ranchi airport crew, representatives of private airlines and Central Industrial Security Force (CISF) personnel on restarting flights.

“The meeting discussed standard operating procedures issued by the Union civil aviation ministry for resumption of domestic flights and other necessary measures such as maintaining social distance among flight passengers and steps for sanitising flyers,” said a senior official of the airport.

“A system where flyers right from entry to boarding the plane will have minimal contact with the airport staff and security personnel is being worked out. It is expected that 30 per cent of the flight capacity would be booked to maintain social distancing,” the official added.

Ranchi airport currently has nearly 29 flights and its apron has the capacity for three Airbus (A-320) and two 19-seater ATR planes at one time. According to data shared by the transport department, the 1,568-acre airport handled more than 22 lakh passengers in 2019.

“The airport authority also discussed with the private airline operators about online boarding passes which flyers can bring from home,” said a highly placed source at the airport.

“Flyers will have to report two hours prior to the flight time and stand in a queue with gloves and mask on at the entrance gate in demarcated spots to maintain social distance. Passengers will have to install the Aarogya Setu app (developed by the Union government to track Covid-19 positive cases) on their phones and fill up a questionnaire on their travel plans and health conditions after thermal screening,” the source added.

There will be thermal screening at the entry and boarding points. Passengers will have to bring their own food because only water bottles will be provided in the flight.

Discussions were also held on installing web cameras at the entry, boarding and luggage scanner points so that there is minimal contact for checking of documents. Manual frisking will be done only if the metal detector door beeps.

“We have started preparing for the resumption of flights and are waiting for a formal notification from the Airports Authority of India on the exact date of start of the service. Apart from special operating procedures on social distancing and sanitising we have plans for a touch-free system where a flyer coming at the entrance point manned by the CISF will show the tickets on a webcam and the personnel will screen the ticket and give permission for entry,” he said.

“The baggage will be sprayed with disinfectant before allowing it into the X-ray machines. Even at the check-in counter we are planning for boarding passes to be issued to flyers at their homes or a card reader which will read the boarding tag. Even before embarking, as manual stamping of boarding passes has been stopped, a CCTV camera will digitally record the boarding pass details,” said the director.

International flights in the country were suspended since March 22, while domestic flights were prohibited from March 25.