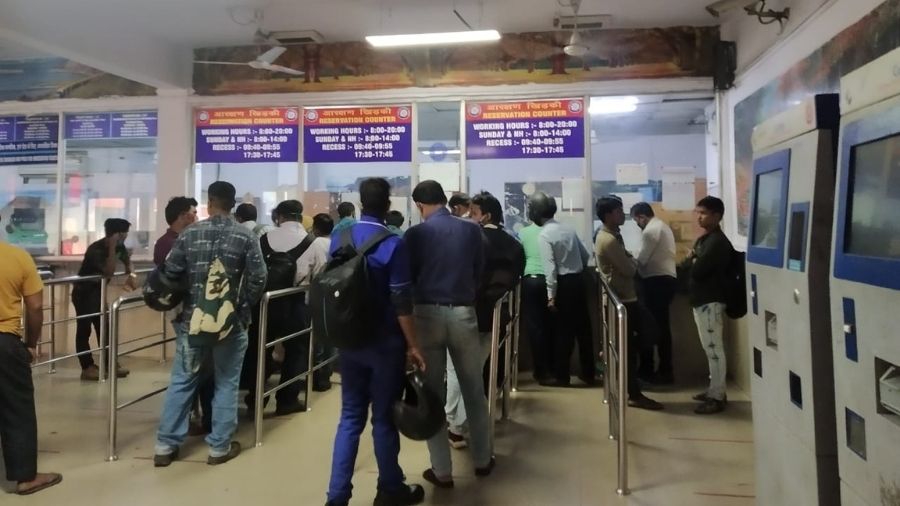 In a first after the coronavirus-induced lockdown got imposed in March, two railway ticket touts were sent to Ghaghidih Central Jail on Tuesday, following their arrests from the Tatanagar Railway Station on Monday night.

One of the scalpers, identified as 24-year-old Mohammed Sahad Khan, was arrested by a team of the Railway Police near the Computerised Reservation Centre (CRS) centre at Tatanagar, while the other, 21-year-old Rohit Kumar Tiwary, was booked from his house at Chhotagovindpur in Govind.

Khan, a resident of Azadnagar, was caught by the railway police for illegally getting reserved tickets for his `clients' at the railway reservation counter. On the other hand, Tiwary was arrested for violating the norms of IRCTC and procuring online tickets at his house.

Revealing the breakthrough, M.K Sahoo, inspector Railway Protection Force (RPF), Tatanagar, said that the police had got a tip off after the number of passengers t the breakthrough, inspector, Railway Protection Force (RPF), Tatanagar, MK Sahoo said that they had got tips off that after the rush of passenger started to pick up post-lockdown suggesting that several brokers became active in providing reserved tickets from the ticket reservation counters as well as through online booking. “We set up two separate teams of the railway police for probing into the information and act accordingly,” he said.

"One of the teams first carried out an inspection in plain clothes and identified some suspected touts at the railway ticket reservation counter. A few minutes before the reservation counter was closed, the team raided the reservation counter and nabbed a youth to recover more than one reserved ticket. On being interrogated, the youth who gave his name as Mohammed Sahad Khan  was indulged in touting tickets.  Khan was taken into custody immediately," said Sahoo, while talking to The Telegraph Online.

The RPF inspector pointed out the railway police team had also scanned the CCTV footage at the CRC and found that Khan had been procuring the reserved tickets from the reservation counter every day since the past week.

The other team, which was tasked with detecting online fraud, identified Tiwary and verified if he was reserving the tickets from his house at Govindpur in a genuine way.

"But during investigation, it was found that Tiwary had opened a personal ID through which he was making the tickets and would sell them at a premium price. The accused had no approval of the IRCTC and continued to make tickets online by using his personal ID.  Hence the railway police team picked up Tiwary from his house too," Sahoo said.

The duo was subsequently produced before a judicial magistrate on Tuesday afternoon and moved to the Ghaghidih Central jail later in the day.

The train services had come to a standstill since March 23, but the railways had gradually resumed the services since May. Currently 56 trains pass through Tatanagar in the Chakradharpur railway division daily. Of the 56 trains,18 are regular, which run on a daily basis, but due to the festive and wedding seasons, the rush of passengers has surged recently.

Senior divisional commercial manager, Chakradharpur, Manish Pathak, while talking to The Telegraph Online, said, "The existing provision of 56 trains through Tatanagar will continue till November 30, and from December 1 onward more passenger trains are likely to resume service.”