Shyamal Mandal, 26, used a shovel to create a passage to drain out ankle-deep water on the main road in the local market on Wednesday morning 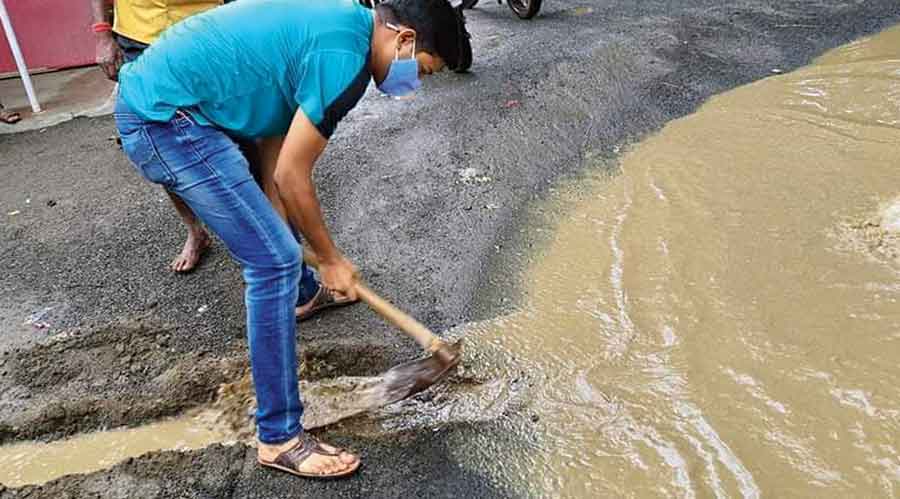 A young police officer in Dumka district of Jharkhand has gone the extra mile in resolving a civic problem beyond his mandated responsibilities.

Shyamal Mandal, 26, officer-in-charge of Kathitund police station, around 25km from the district headquarters, used a shovel to create a passage to drain out ankle-deep water on the main road in the local market on Wednesday morning.

“It was nothing great. I usually go for patrolling in civvies in the morning. A particular stretch of the Kathitund Main Road was waterlogged after overnight rain creating problem for the traders and masses. I discussed with the traders and arranged for a shovel to cut a small passage so that the water could flow into the nearby drain. Though it was not in my line of duty but I had this urge to help,” said Mandal, who graduated in history honours in 2015 and is from the 2018 cadre of the Jharkhand Staff Selection Commission (JSSC).

The traders were happy and pleasantly surprised by the officer’s work.

“The act has created a change in our mindset about the men in uniform. We usually looked down upon Kathitund cops for being hand-in-glove with illegal stone-crushing unit operators and other negative activities. But this was a nice surprise to see the head of the police station trying to sort out a civic problem on his own. The police official also arranged for a JCB (excavator) and stone chips to fill the potholes on the road caused by the waterlogging,” said Suvidya Kumar, a grocery shop owner in Kathitund market. The act also earned praise from seven-time Shikaripara MLA and senior JMM leader Nalin Soren.

“Usually police officials advise residents to approach the road construction department or civic authorities (the mukhiya since the area falls under a panchayat) to sort out the issue or they themselves ask the civic authorities to repair the roads. It is a rare thing to see an officer-in-charge of a police station carry out road work. I would certainly write to the Dumka superintendent of police Amber Lakra to felicitate the young officer. I will also write to the road construction department to arrange for repair of the road at the earliest,” said Soren.

Several attempts to contact the Dumka SP failed to elicit a response.