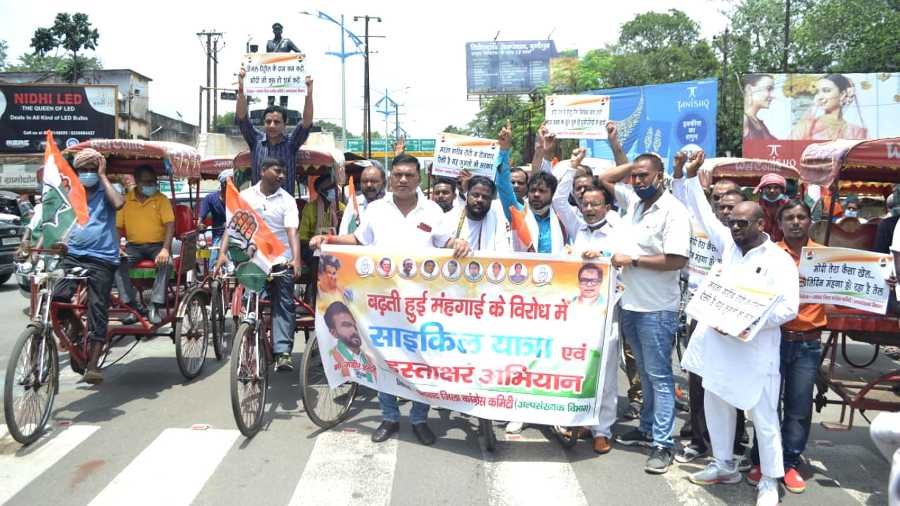 Workers and activists associated with the district unit of the Congress Party’s minority cell organised a cycle- rickshaw rally near Dhanbad district headquarters. The demonstration was part of the party’s nation-wide protest against sharp rise in petrol- diesel and LPG price.

The protestors led by Jahir Ansari, district president of the minority cell of Congress even conducted a signature campaign, demanding immediate roll back of hike in fuel and LPG prices.

The rally began at 11.30 am from Randhir Verma Chowk under the joint leadership of Shamsher Alam, state executive committee member of Congress, Pintu Turi, state convenor of scheduled caste cell of Congress. It concluded two hours later near Green View Petrol pump and was followed by the signature campaign.

The agitators were seen holding banners and posters. They even chanted slogans like ‘Narendra Modi, sharm karo-aam janta par raham karo; diesel-petrol ka daam kam karo’ along with other slogans.

Talking to The Telegraph Online at the protest site, Jahir Ansari said, “At a time when the common man is buckling under financial repercussion of the 16-month-long pandemic, such steep hike in petrol, diesel and LPG prices, is more of a curse for them.”

He added, “During the protest, we organised a symbolic cycle rally today to express our anger against the hike in fuel and LPG prices. The rising price is hurting us all.”

He further explained his point, “The general public is having difficulty in managing the household expenses. Many have been compelled to discontinue their child’s education as the reduced income has made it difficult for many to pay the school fees.”

Echoing a similar sentiment, Shamsher Alam, said, “The BJP government at the centre led by prime minster, Narendra Modi came to power with the promise of ‘achchhe din’but now the common people are experiencing the worst kind of achchhe din where petrol and diesel prices have touched Rs 100 per litre, while mustard oil cost around Rs 200 per litre. Similarly, the cooking gas price is hovering around Rs 1000 per cylinder.”

Alam maintained that the BJP leaders during the UPA rule used to resort to chest beating campaigns when there a price hike by 25 paise per litre. He reminded, “These very people are now oblivion to steep hike and are distracting people from the core issue in the name of jingoism,” he said.

Pintu Turi on other hand accused the central government of having policies that only benefit the capitalists. He said, “All the policies of the BJP-government are aimed at benefitting its capitalist partners, right from the hike in fuel prices to the anti-farmer law.”

He added, “We will continue our agitation and compel the anti-poor government at the centre to roll back the hike.”