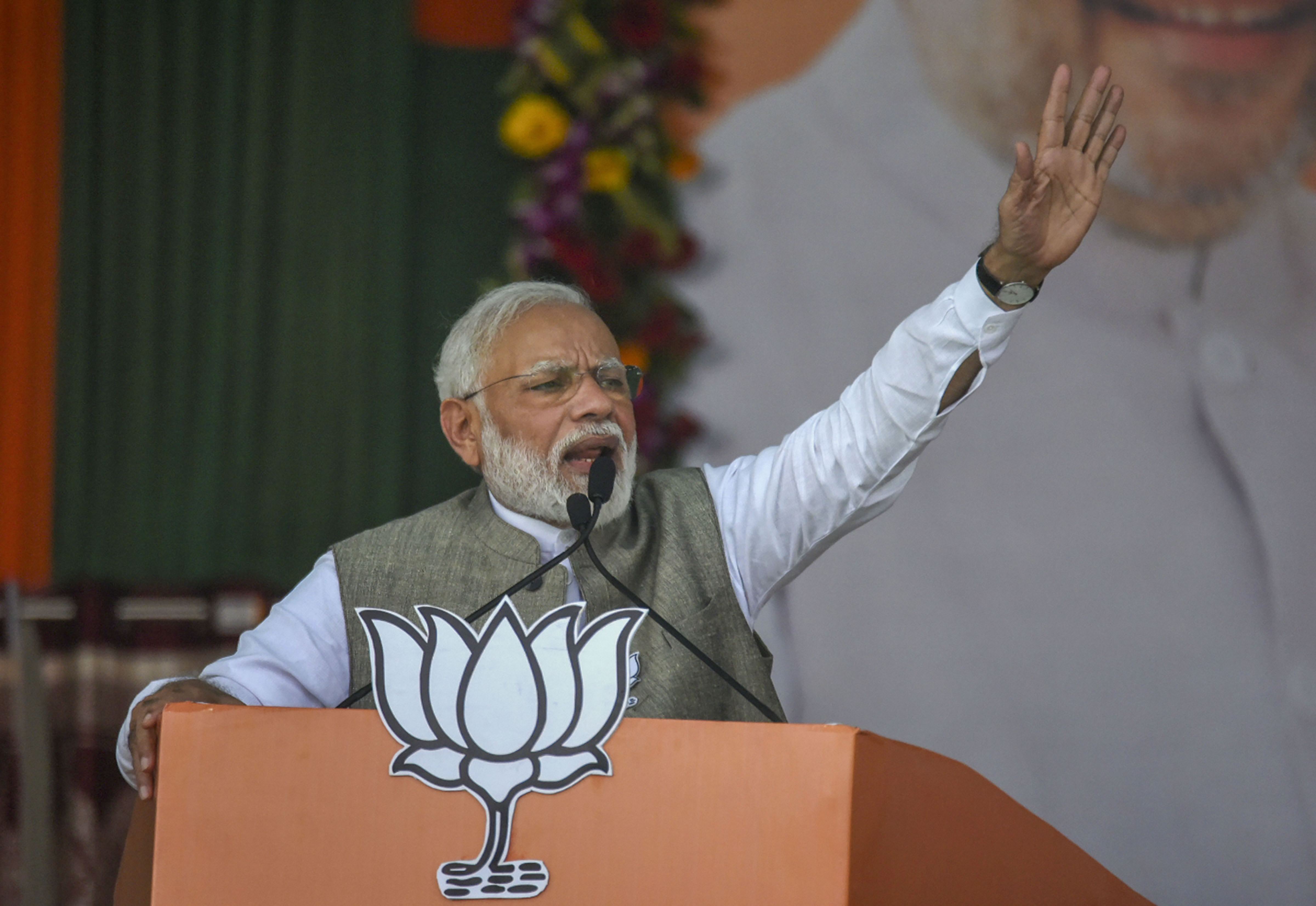 Prime Minister Narendra Modi addresses a gathering during an election campaign ahead of the first phase of Jharkhand Assembly polls, in Daltonganj, Palamu, Monday, November 25, 2019.
PTI
PTI   |   Daltonganj   |   Published 25.11.19, 10:26 AM

Prime Minister Narendra Modi, mounting a blistering attack on the Congress-JMM-RJD alliance in Jharkhand, alleged on Monday that their 'self-seeking' past governments were driven by the 'lust for power' and exploited the mineral-rich state's resources while neglecting its people.

He also accused the previous Congress governments at the Centre of procrastinating resolution of the Kashmir tangle and the vexed Ayodhya dispute.

'This election is a contest between those who serve and those who loot. The Congress has problems, we have the solutions. They have accusations, we have the report of the work we have done. They have empty promises, we have the proof of development,' Modi told a poll rally in Daltonganj, his first ahead of the state Assembly elections.

The Prime Minister asserted that the BJP was committed to the five principles of social justice—stability, good governance, prosperity, respect for all and security.

Naxalism flourished under the non-BJP governments due to political instability, he said.

'Governments were made through the back door. There were alliances of self-seekers who were driven by the lust for power and exploited the resources of the state,' Modi said.

'They had their eyes on the riches found beneath the surface of the earth and cared little for those living on the earth. How would it then have been possible to give electricity, roads and water to people? Set up industries?' he said.

Modi said it was for the first time since the creation of Jharkhand in the year 2000 that the BJP government led by Raghubar Das had completed its full term.

The Das government, he said, worked day and night to end corruption and set up institutional mechanisms for greater transparency in governance. He said the BJP government worked hard to end naxalism and crime.

The Prime Minister also raised the issue of forest rights of tribals, asserting: ' The BJP is committed to protecting your right to 'Jal, Jungle, Jameen' (water, forest and land).'

He said a district mineral fund has been set up by the Centre to ensure that the benefits from resources mined in tribal areas reach the people there. Jharkhand has received Rs 5,000 crore from that fund, the Prime Minister said, adding steps were being taken to fast-track settlement of forest rights claims.

Modi urged people to vote the BJP to power for a second successive term, saying that the 'double-engine' growth of the state became possible because the party was in power both at the Centre and in the state.

'We sent funds and brought pressure on the previous BJP governments in Uttar Pradesh for speeding up construction of houses for the poor but to no avail. But since the advent of the Yogi Adityanath government, UP is at the top in building dwellings for the poor,' he said.

Elaborating on the benefits of 'double-engine' growth, the Prime Minister said apart of the gas connection given to poor families under the 'Ujjwala Yojana' by the Centre, the Jharkhand government had provided second gas cylinders to 33 lakh households in the state.

Under the 'Kisan Samman Nidhi' scheme, the Jharkhand government has given an additional Rs 25,000 to the targeted beneficiaries apart from the funds made available by the Centre, Modi said.

'The benefits of double-engine growth are many. There is continuity of development....no political games are played,' he said.

The Prime Minister said states like West Bengal, Rajasthan and Chhattisgarh, where BJP's rivals were in power, were not being able to reap the fruits of the central government schemes because of impediments created by the state governments.

The Prime Minister also raked up the hugely-divisive issues of repeal of special status granted to the erstwhile state of Jammu and Kashmir, and the Ram Janmabhoomi-Babri Masjid dispute.

'The Congress follows the policy of procrastination so that it can keep collecting votes. The party kept the issue of article 370 pending. We had promised a resolution and we fulfilled it. The Ram Janmabhoomi dispute in Ayodhya had lingered for decades. The Congress could have resolved it, if it so wanted, but it chose to hurt the society, the country to protect its vote bank. See, today the dispute stands resolved,' he said.

Modi also reaffirmed his commitment to the principle of 'Ek Bharat, Shreshtha Bharat', asserting unity was in the larger interest of the country.

He also recalled how the Atal Bihari Vajpayee government had created Jharkhand and set up a ministry to exclusively handle the welfare of tribals.

'For 50 years, there was no ministry of tribal affairs to look after the interest of adivasis. There was an OBC commission but it lacked constitutional status. We ensured that constitutional status was bestowed on the commission,' Modi said, as he sought to reach out to the vast tribal electorate of Jharkhand.