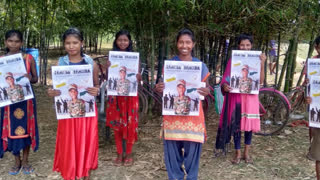 The cover page of a comic based on the life of soldier Ganesh Hansda, who martyred in a clash between Indian and Chinese troops at Galwan Valley on June 15, was released on his birth anniversary from his home at Kosafalia village in Baharagora block of East Singhbhum, 100 km east of Jamshedpur, on Tuesday.

The simple unveiling ceremony took place in the presence of Hansda’s parents Subda and Kapra and villagers of Kosafalia.

The comic ‘The fighter of Galwan Valley’ is based on Hansda’s struggle. The cover page has a picture of the martyr and other Indian soldiers protecting the border with the national flag fluttering in their hands.

The script of the comic is being written by a team from Nischay Foundation, a Jamshedpur-based social outfit.

According to Tarun Kumar, founder of Nischay Foundation, work on the comic has started in the right ernest. “We have started working on the comic which will have the life story and interesting incidents related to Hansda. Children love to read comics. The comic on Ganesh Hansda’s life would inspire the children and youths to fulfill their dreams by following the ideals of Hansda who parted with his life for the country,” he added.

The Nischay Foundation founder, who is writing the story and dialogues, said the comic will be  designed by Jamshedpur-based artist Anupam Pal and Invincible Studio. The comic will be launched on June 15, on the death anniversary of martyr Hansda,”Kumar informed.

Students of Veer Shahid Ganesh Hansda Pustakalaya at Bhandarshol and Ladhnashol garlanded the picture of the martyr and cut a cake to mark his birthday. A football tournament was also organized at Kosafalia village in which eight teams under Chingra panchayat took part.

Hansda (21) was pursuing his intermediate from LBSM College in Karandih, a Jamshedpur suburb, but dropped out in the second year in 2015.

He went to train with NCC for three years and was selected for the Army during a direct recruitment drive held at  Morabadi ground in Ranchi in 2018.

After completing  nine months of training at Danapur in Bihar, he was posted at Leh.

The martyr is being held in high esteem in the region and several youths believe in his ideals and want to follow in his footsteps.