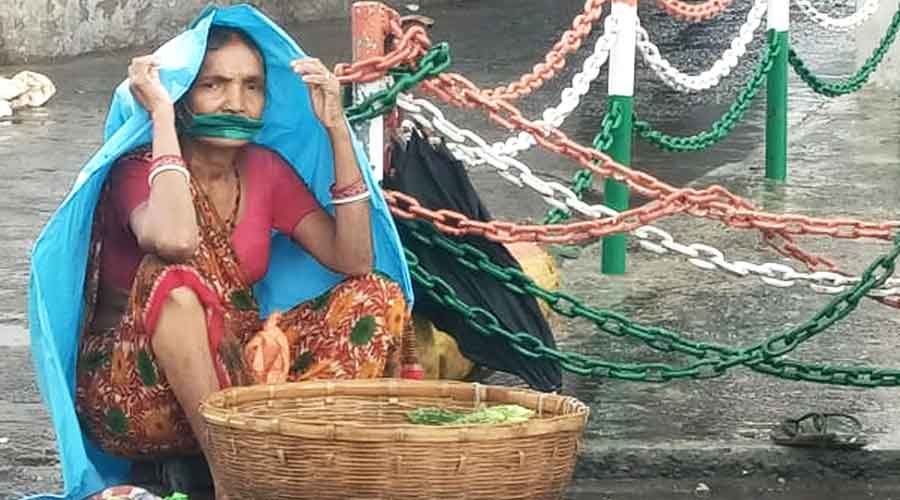 The incessant rains since the last seven days has exposed the failure of the Dhanbad Municipal Corporation in developing vending zones for more than 10 thousand street vendors as they are rather driven away from one place to other in the name of anti encroachment drives and thus compelled to sit under the open sky amidst rains to eke out their living.

In 2018, the civic body had identified 12 sites across the five circles of district, including, Jharia, Dhanbad, Sindri, Katas and Chhatatand for development of vending zones as per the provisions of National Urban Livelihood Mission.

Lack of NOC from the respective government departments and other organisations which owned the land led to the shelving of the vending zones development work at these sites.

Although, construction work at one of the sites at Baniahir in Jharia began three years ago but due to land dispute from local residents the project was stopped midway.

Talking to The Telegraph Online on Sunday, Sneham Sinha, district coordinator of NGO, National Association for Street Vendors of India said, “I tweeted to PMO, Chief Minister Hemant Soren, minister of state (independent charge) Housing and Urban affairs, Hardeep S. Puri and Dhanbad Deputy Commissioner Uma Shankar Singh, highlighting about the poor condition of more than 10 thousand vendors compelled to work under the open sky and demanding shelters for them to operate.”

“I can’t understand the reason that when vending zones can be established in Ranchi and nearby Giridih district why can’t they be established in Dhanbad,” said Sinha and added that due to lack of vending zones the vendors are driven away from one place to other in the name of anti encroachment and thus the even the temporary shades of plastic sheets etc get destroyed.

Echoing his sentiments, Shyamal Mazumdar, general secretary of Footpath Dukandar Rozi Roti Uparjan Sangh said, “Why can’t the existing operational areas of street vendor like Hirapur Hatia be developed into vending zones as has been done in nearby Giridih by developing basic amenities like drinking water facility, toilets, shelters, lighting arrangement etc if the finding new land is leading to delay in developing vending zones.”

Contacted, Sumit Kumar Singh, City Manager (National Urban Livelihood Mission) of DMC said,“We are zeroing in on three new sites in Dhanbad town for developing vending and would soon send the details to Circle office of Dhanbad and after verification of land will start construction of vending zones equipped with all facilities probably by next year.”