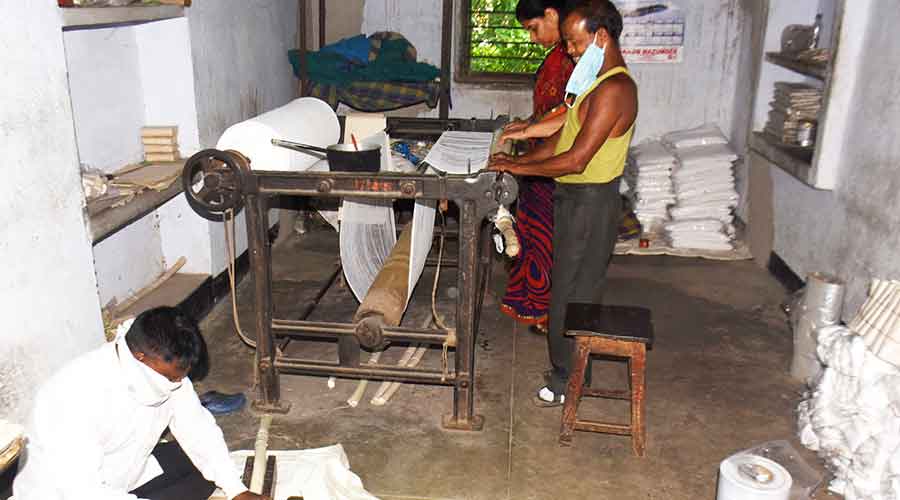 OT gowns and other goods being processed at the Barmasia Rehabilitation and Training Centre in Barmasia, Dhanbad on Wednesday.
Gautam Dey
Praduman Choubey   |   Dhanbad   |   Published 21.07.21, 07:21 PM

Courtesy the training and other infrastructural support in the form of machineries, like powerloom provided to them at the BRTC as part of their comprehensive rehabilitation carried out at the centre by Damien Welfare Centre.

Talking to The Telegraph Online, Fr Ajay Tiru, Director of Damien Social Welfare Centre said, “We have 18 power looms, 25 charkhas, one rolling machine, two sewing machines at the centre through which production takes places on regular basis and products are sold to different hospitals and nursing homes of Dhanbad.”

“All the inhabitants of the colony are the leprosy cured (Leprosy negative) persons so there is no risk of any spread of any infection due to use of products made by them,” said Tiru.

“Besides training support and machinery, free water and power supply is provided to them at 35 cottages lying in the centre,” said Tadon and added that the toilets have been constructed by Dhanbad Municipal Corporation at the centre.

“We also arrange for education of around 20 children of these leprosy cured persons at different adjoining private schools and because of the fact they have brought into the mainstream of society through their activities, these children are leading a normal life with other children,” said Tandon and added that their centre operates not like a commercial organization but rather  as a welfare activity.

“We carry out the production despite sometimes suffering losses as part of our effort to bring these people into the mainstream of society, who once due to the diseases were compelled to live at the fringe of the society,” said Tandon.

Shankari Mahto, one of four permanent staff of the centre, who looks after the maintenance work of the centre said “all the inmates of the centre live in quite cordial manner as part of a family despite belonging to different socio-economic and religious backgrounds.”