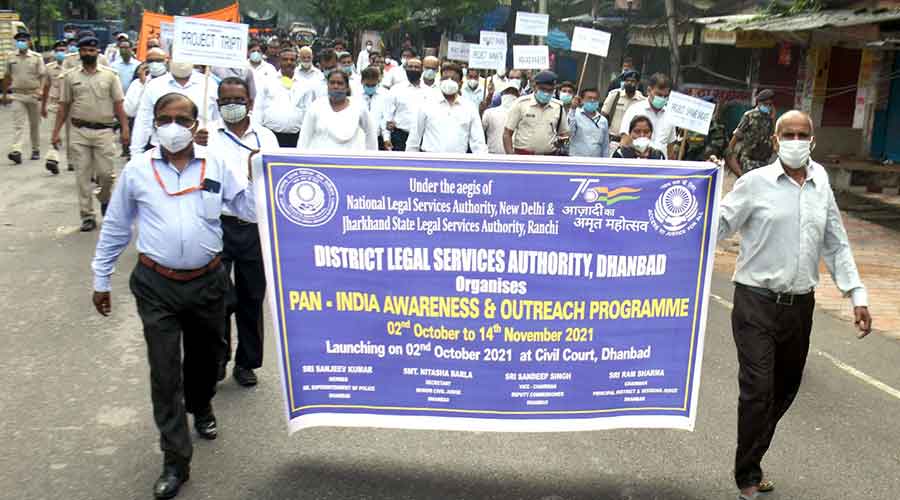 Dhanbad’s legal fraternity, including judicial officers, lawyers, court staff and para-legal volunteers along with school students took out a march to raise awareness about the aid being provided to common people under the various schemes of the National Legal Service Authority (NALSA) meant for social upliftment and legal empowerment.

The march was taken out by Dhanbad Legal Service Authority (DLSA) as part of the pan-India awareness and outreach programme of NALSA being conducted as part of a 13-day long Azadi Ka Amrit Mahotsav programme being organised to commemorate 75 years of Indian independence.

The march was taken out under the leadership of Ram Sharma, Principal District and session judge of Dhanbad.

It began at around 7am and reached the City Centre of Chowk of Dhanbad passing through Randhir Verma Chowk, SSLNT Women’s College and Dhanbad club, where dignitaries garlanded the statue of Mahatma Gandhi.

Talking to media at the sidelines of march, Ram Sharma, who is also the chairman of DLSA said, “Our Para Legal Volunteers will visit different villages of the district as  part of the programme which will continue till October 14 during which they will apprise people about the various welfare schemes of the government meant for the common people and also note down the names of people who are deprived of the benefits of the scheme and then coordinate with the concerned government department to ensure the benefit of such schemes for them.”

She further said that a number of other schemes including Tripti, Manavta, Aatmnirbhar, Kartavya under the aegis of Jharkhand legal services authority, to provide the benefit of legal services to different people.

On June 24, DLSA provided cheques worth Rs 20,000 each to eight children who lost both their parents during the pandemic.