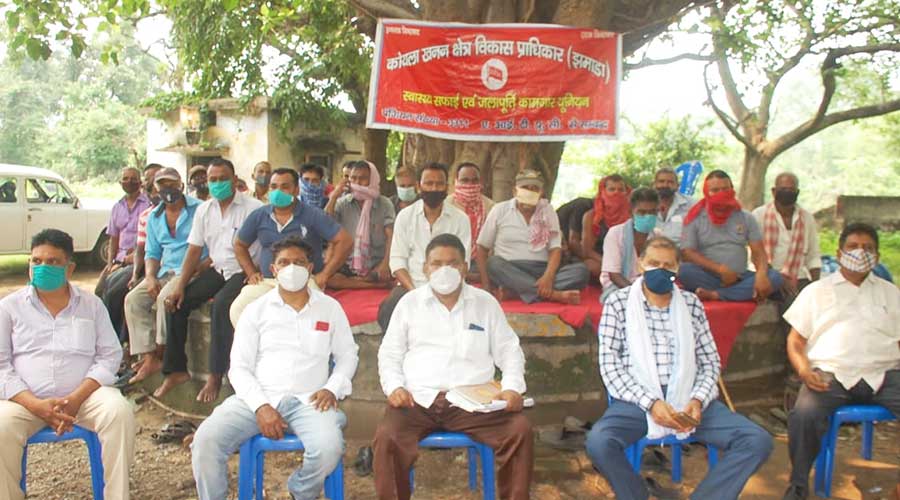 JMADA workers during the meeting at the water treatment plant of Jamadoba in Jharia on Thursday.
Picture by Shabbir Hussain
Praduman Choubey   |   Dhanbad   |   Published 10.06.21, 11:13 PM

More than 650 workers of Dhanbad’s oldest civic body, Jharkhand Mineral Area Development Authority, held a meeting on Thursday and decided to serve a notice to the Managing Director warning of a series of protests against non-payment of salaries of over 45 months.

The delayed payment problem arose in JMADA around a decade ago due to loss of different sources of revenue through tonnage cess, royalty cess, stamp duty, sanitation tax etc withdrawn as per the different acts of government brought in phase wise manner.

The two-hour meeting was held at Jamadoba based water treatment plant under the chairmanship of Md Aslam, in-charge of Putki based water supply network, discussed issues like inadequate revenue collection in terms of water supply charges and holding charges etc.

Talking to The Telegraph Online, Aslam said, “Despite the fact that a fund worth Rs 38crore was provided by the state government, there is no initiative with regard to payment of pending salaries of over 45 months.”

“Recently the pending salaries for 26 months of JMADA officers have been cleared but the common workers including the machine and pump operators working at water supply installations at Jamadoba, Tilatand, Putki, Topchanchi and Chhatabad as well as sanitation workers are being deprived of their pending salaries without any reason,” said another JMADA employee Tulsi Mahto present at the meeting.

“Not only pending salaries but the lack of other development work carried out by civic body, like pipeline laying, maintenance of existing water supply network by carrying out repair of the non functional motors etc further questions the apathetic attitude of the JMADA administration as funds worth Rs 21 crore received as Bazar fee for development work is also lying unutilised,” said Surendra Halkhor, a worker at the water supply division of JMADA.

“Though, we are not going to stop the water supply as part of our protest over the pending salaries or other issues but we will serve a notice to the JMADA administration seeking reasons for their nonchalant attitude and warning them to mend their ways in order to solve all issues otherwise we will be forced to carry out phase wise agitation,” said Halkhor.