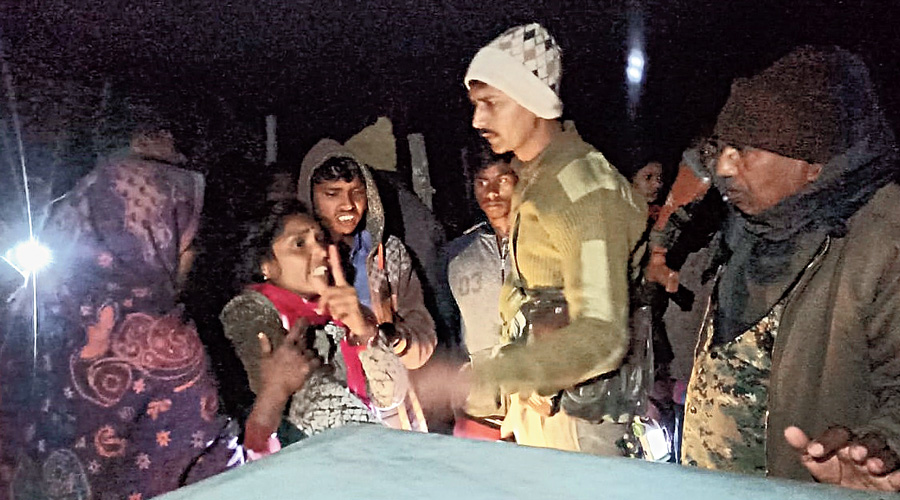 Police and administration officials with the bereaved family members at Garhwa on Wednesday.
Bhola Prasad
Animesh Bisoee   |   Jamshedpur   |   Published 12.02.21, 01:20 AM

Three children were buried alive after a mound of mud caved in at Koiritola in Sharda village in Jharkhand’s Garhwa district, around 220 km from state capital Ranchi on Wednesday evening.

The dead children included Supriya Kumari, 11, and Pritiya Kumari, 10, — both daughters of Rajesh Ram —and the 13-year-old son Ramashish Ram, grandson of Sitaram Ravidas, all residents of Sharda village.

According to Sagma block development officer Dipak Minz, the three children had come out of their house at around 7 pm to play in the field on the banks of the Turi rivulet. At night, when they did not return the family members started searching.

“It was then that they got information that few children had got into the mud mound and during the course of searching using excavators they found the bodies of the three children. We have come to know that few persons had used JCB excavators to dig sands for construction purposes and later on even some villagers also had dug sands for construction purposes and this had led to a shallow pit of sand which caved in on Wednesday,” said Dipak Minz.

The BDO who had to face locals’ wrath on  Wednesday night while recovering the bodies said that the administration will carry out a detailed probe into the incident.

“We will start a probe to identify the persons who had started digging sands from the pit and only after probing we can ascertain what action should be taken against those persons who had dug sands leading to such shallow structure causing death of minors,” added Minz.

The bodies of the three children were sent to Garhwa Sadara Hospital for post-mortem and handed over to relatives on Thursday for the last rites.

The BDO who was present during the last rites of the three children gave an amount of Rs 3000 each to the families whose kids have died in the mishap and also 1.5 quintals of rice to each of the families,” said Dipak Minz.