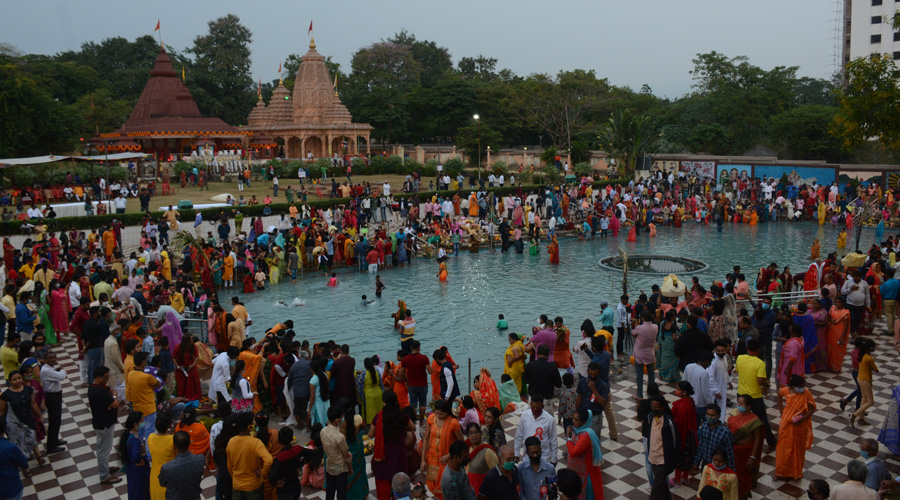 The banks of river Subarnarekha and Kharkai witnessed a large turnout as devotees (chhath vratis) along with their families and friends gathered to offer the first arghya of Chhath Puja on Friday evening.

The first arghya is offered to the setting sun while chhath vratis will offer the second arghya (also known as bihaniya) to the rising sun on Saturday that brings to an end of the four-day Chhath festival.

There were over 20 ghats in the city where Chhath was celebrated.

Former CM Raghubar Das and others celebrate Chhath at the Surya Mandir on Friday evening.
Pic by Bhola Prasad

Due to the ongoing Covid-19 pandemic and safety reasons, many preferred to celebrate the festival at their homes. Be it Mango, Ghorabandha in Telco, Baridih, or Sakchi several devotees made rooftop tanks or made temporary tubs with knee-deep water at their gardens and courtyard of their homes for performing the Chhath rituals.

The Surya Mandir in Sidhgora also witnessed a good turnout of devotees who had come to offer arghya at the two artificial reservoirs.

Every year the temple committee organizes a musical concert in the evening. But, this year the musical event did not take place due to the pandemic.

“This year was different because of the Covid-19 pandemic. We had taken all safety precautions and appealed to devotees to follow the safety norms. Chhath festival at the Surya Mandir has become one of the major attractions of late,” said a member of the Surya Mandir Committee.

The cleaning of ghats was done by Jamshedpur Notified Area Committee (JNAC) and Jusco. Jusco also provided adequate lighting, barricading of the road leading up to the ghats, preparations of roads leading to all ghats, shamiyana and sitting arrangement for government officials, public address system for announcements and changing rooms for chhath vratis.