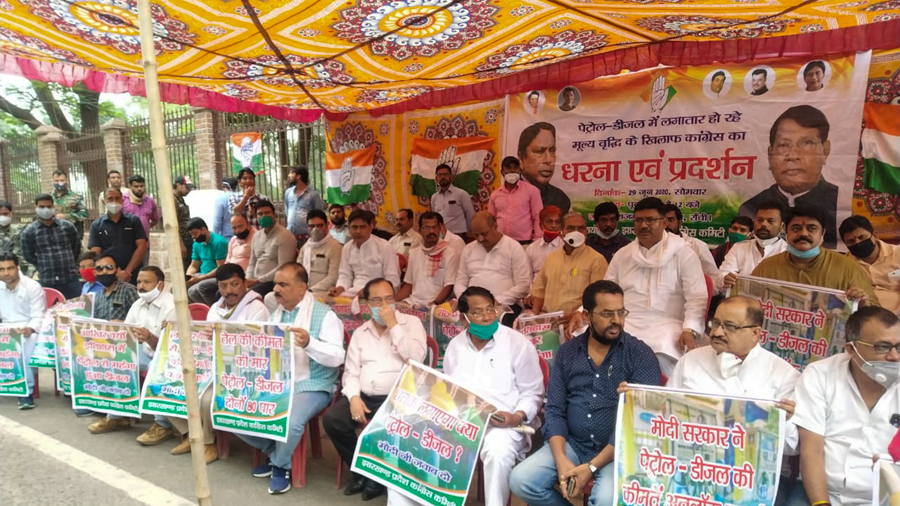 A demonstration was organised by the Congress near the Raj Bhavan on Monday against the increase of petrol diesel price
Manob Chowdhary
Our Bureau   |   Published 30.06.20, 02:56 AM
Garhwa reports coronavirus cases

Covid-19 cases were reported from Garhwa district for the first time since June 25. Four persons tested positive for the coronavirus in the district on Sunday night.

District civil surgeon N.K. Rajak confirmed that two youths, aged 18 years and 26 years, hailing from the Banshidhar Nagar police station area; a 36-year-old from Meral; and a 50-year-old from Garhwa village had been confirmed Covid-19 positive. They had arrived from Pune, Noida and Haryana on June 21.

Three of them were in institutional quarantine at a school in their locality while the Garhwa village patient was in home quarantine. Three patients have been admitted to the Sadar hospital, Garhwa, and one to the Covid-19 hospital in Meral.

The health department has begun contact tracing of the patient who was in home quarantine.

The overturned bus in Ramgarh on Monday
Vishvendu Jaipuriar

A bus carrying migrant labourers from Gujarat to Bengal overturned in Ramgarh district, killing one person on the spot and injuring 27 others.

He said one of the front tyres of the vehicle burst, causing the bus to overturn.

The dead was identified as Chanchal Roy, 25, of North Dinajpur.

Among the hurt, 10 sustained minor injuries and were discharged after primary treatment. The rest were referred to Rajendra Institute of Medical Sciences (RIMS), Ranchi.

Sources said the incident took place in the morning while the bus was on its way to Bengal via Ramgarh.

Food was provided to the injured on instruction of Ramgarh MLA Mamata Devi.

One of the labourers said the passengers of the bus belong to different districts of Bengal and were working at a textile company in Gujarat.

This is not the first accident in the area in recent months. A few weeks ago, a bus had turned turtle at the same spot carrying migrant labourers to Bengal, injuring 35.

Additional sessions judge III-cum-Pocso court, Rajeev Ranjan, in Bokaro on Monday sentenced a man to 20 years of rigorous imprisonment and a fine of Rs 20,000 for raping his 15-year-old cousin.

The incident occurred on March, 12, 2019, at Barmasiya area of Chandankyari.

The court held Saddam Ansari guilty under Section 376(3) of the Indian Penal Code.

The victim was raped several times by Ansari. He had also threatened her to kill her parents if she complained about him.

Police in Giridih on Monday seized three vehicles loaded with beer from SRC Steel company premises in the industrial area on Monday evening.

Police have arrested four people in this connection.

The beer was being illegally stocked and transported.

The raid was conducted by a police team headed by subdivisional police officer Kumar Gaurav.

The three vehicles seized were parked inside the factory.

The people in the vehicles were also taken into custody and brought to the police station where they are being questioned.

Several advocates demonstrated in front of the main gate of the Bokaro district advocates’ association campus on Monday to demand financial assistance. Advocate Sunil Kumar Singh, alias Anna, said the state bar council had assured them aid to help them during the pandemic. Even after making applications, they hadn’t received the amount.

Eighteen people were caught without wearing masks by police on Hazaribagh district collectorate campus on Monday. The police deployed at the three gates of the collectorate led by Sadar subdivisional police officer Kamal Kishore and deputy superintendent of police Vivekanand Thakur participated in the campaign.

Those caught were kept on the campus and later taken to the Sadar police station. All were released after being granted bail in the evening. Officials said similar campaigns would continue.