The gang was involved in burglaries at 9 places in Sidhgora, 4 in Telco, 3 in Kadma, 1 in Bistupur, 1 in Sakchi 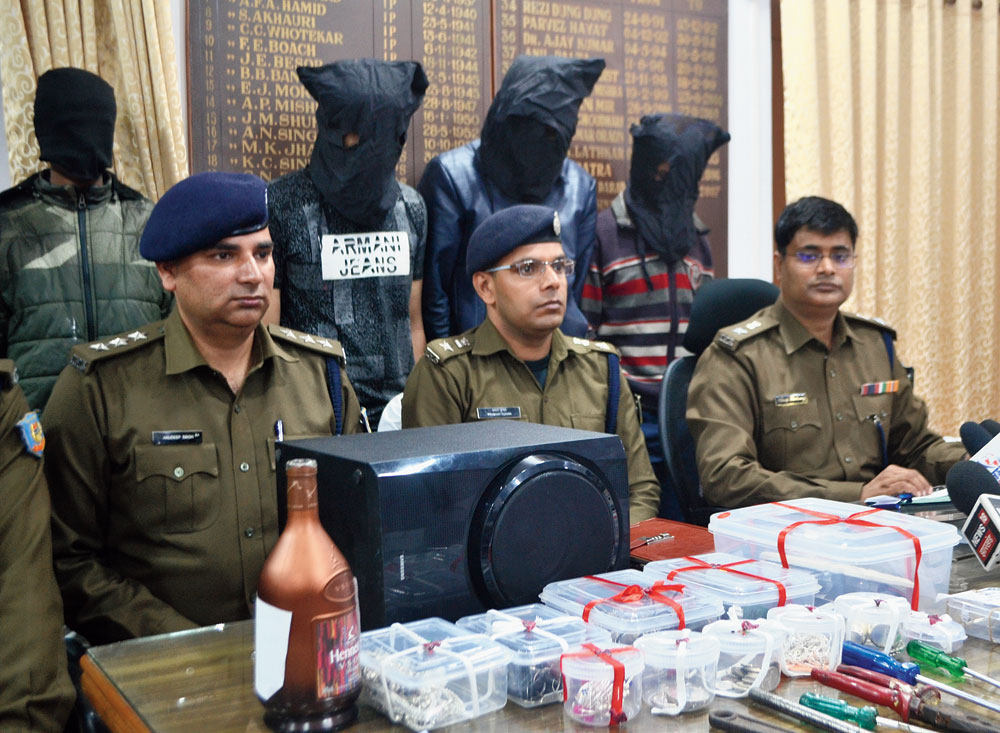 The arrested burglars at the SSP’s office in Jamshedpur on Tuesday.
Picture by Animesh Sengupta
Our Correspondent   |   Jamshedpur   |   Published 12.02.19, 06:52 PM

A gang of burglars that had been terrorising the steel city for three months and had pulled off break-ins near the chief minister’s residence earlier this month was busted on Tuesday with the arrest of its four key members and an accomplice.

As many as 18 cases of theft and break-in are registered against the quartet who are all local residents, police said. Jewellery, mobile phones, tools used in the crimes, and a stolen car and scooter have been seized.

East Singhbhum SSP Anoop Birtharay identified the four as Rohan Singh (29), Harpal Singh (28) and Gurjeet Singh (27) of Namda Bustee in Golmuri and Vikas Singh (23) of Jojobera in Govindpur. Their arrested aide is jeweller Kedarnath Soy (32), a resident of Sidhgora where he also runs his own store.

“The gang was involved in thefts and burglaries at nine places in Sidhgora, four in Telco, three in Kadma and one each in Bistupur and Sakchi. We have recovered part of the booty they amassed. It includes gold and silver jewellery, wrist watches, a music system and a car, among others,” Birtharay said.

The car, the SSP mentioned, belonged to one Kishun Soren of Bagunhatu, Sidhgora, and was stolen on January 30. It was used as an escape vehicle later.

“The gang mostly targeted houses that were empty. While Roshan and Surjeet carried out a recce to zero in on a soft target, the other two executed the crime,” the officer said.

The modus operandi was simple and neat. The gang would scale the boundary wall and break open locks using screw drivers and similar everyday tools. Two kept watch outside and the others rummaged through belongings inside.

“Since the break-ins were very systematic, they managed to pull them off so many times. After the burglary of Rs 4 lakh at a house on Road 12 in Agrico (near the CM residence) on February 6, we set up a special team under city SP Prabhat Kumar that engineered the breakthrough,” Birtharay added.