Four employees, all from steel city, recognised for their outstanding performance 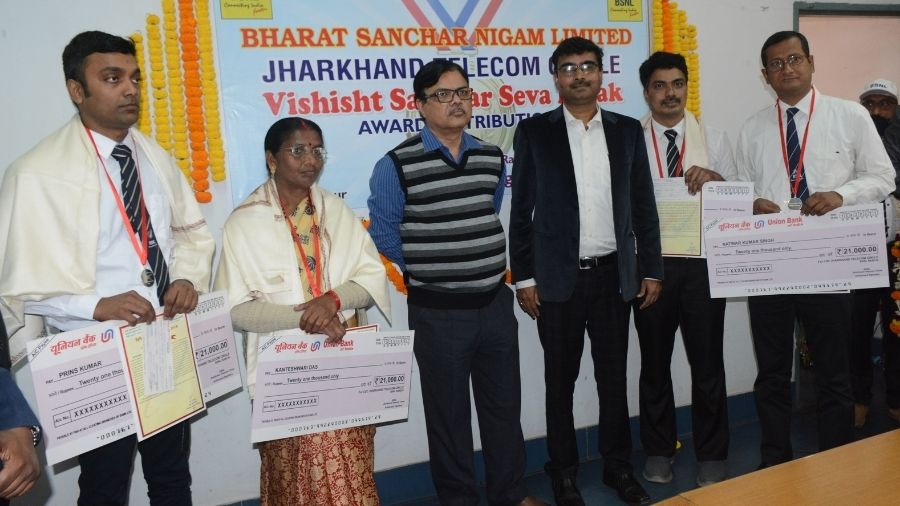 The four awardees with BSNL officials at the award function organised at the company’s Pardih office in Jamshedpur on Friday.
Picture by Bhola Prasad
Pinaki Majumdar   |   Jamshdepur   |   Published 12.02.21, 06:15 PM

Four employees of the Jamshedpur Secondary Switching Area of the Bharat Sanchar Nigam Limited (BSNL) bagged the Vishist Sanchar Seva Padak award of the company, sweeping the ceremony on Friday.

The four awardees were  Kanteshwari Das, Prince, Natwal Kumar Singh and B. Laxmi.

Das, an office superintendent based in the Jamshedpur area, was selected for her outstanding contribution in timely processing of pension, family pension and compassionate ground appointments.

Junior engineer Prince was selected for his outstanding contribution in project Samundra Manthan, wherein scrap and obsolete materials were disposed and sold through  and BSNL earned a revenue of Rs 1.8 crore.

Singh, a sub-divisional engineer, got the award for his exemplary contribution in commissioning 228 number of leased circuits out of 231 circuits (the target given), an achievement of 98.7 per cent, which was the highest in the  entire Jharkhand circle.

Another official B.Laxmi, a sub- divisional engineer was selected for the coveted award for  acting as a change agent in giving a boost to the enterprise business segment in Jamshedpur SSA. She managed to get significant business from not only government institutions but also private companies and corporate houses. The  enterprise business (EB ) segment revenue increased from Rs 5 crore to Rs 6.7 crore in FY 18-19 because of her hard work.

As part of the award, each of them was given a cheque of Rs 21,000,  a 50 gm silver medal along with a citation by K.K.Singh, the new chief general manager of Jharkhand Circle at a ceremony held at the BSNL's Pardih office in Jamshedpur.

The chief general manager congratulated the awardees and motivated others to achieve such a feat.

"This is a reflection of the importance and the role played by the Jamshedpur Secondary Switching Area in the overall growth of the Jharkhand circle," he said at the felicitation event.