Former ONGC officer advises students to think out of the box 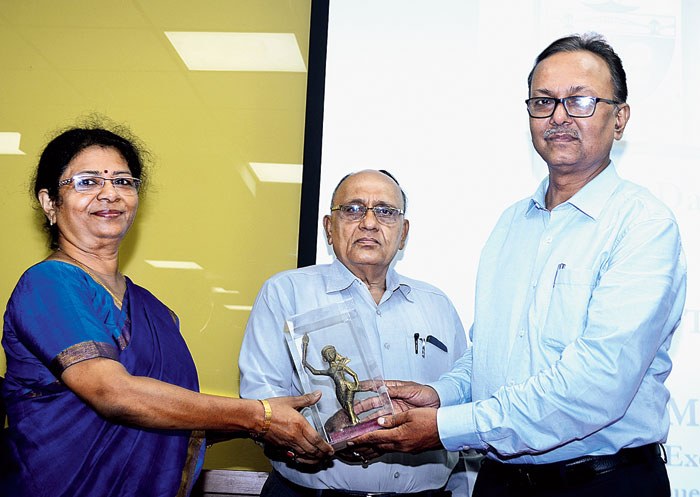 BIT-Sindri welcomed a distinguished guest on Friday, who visited her alma mater after 35 years, barring a brief trip in 2014, and shared her success story with the wide-eyed BTech students on the campus.

Chaitali Dutta, 60, who passed BTech in chemical engineering from BIT-Sindri in 1984, retired as the group general manager of Oil and Natural Gas Corporation (ONGC) in May this year.

She holds the distinction of being the first woman in the country to be assigned the role of the head of oil services at the Maharatna PSU.

The role was part of her responsibility as a group general manager, a post to which she was promoted last year.

She is currently working as a consultant in Mumbai.

Interacting with around 100 students present at the BIT auditorium on Friday, Dutta gave a fair idea of the industry’s expectations from engineers and how their success was dependent more on their logical thinking than the technical knowledge acquired during their academic life.

“Most engineers, after they step into the professional world, find that there is minimum requirement of technical skills that they acquired during their engineering course. Only civil engineers, who require some design and drawing skills, are an exception. However, the study of engineering helps to develop a logical and rational thinking, which is the key to success in any industry,” Dutta told the students.

She advised students to develop the habit of thinking out of the box.

“A positive attitude is a primary requisite for progress. A good communication skill also helps,” Dutta told The Telegraph after the completion of her two-hour lecture.

She said it was imperative for students to never shy away and from challenges.

Dutta said there were very few women engineers at a time she passed out of BIT-Sindri and joined the oil industry.

“However, I didn’t have to face any difficulty of because my seniors and colleagues were extremely helpful,” she added.

The daughter of Anil Kumar Biswas, an engineer of Projects & Development India Ltd (PDIL), and homemaker Purnima Biswas, Dutta did her schooling from Modern English School and Rajendra Girl’s High School before getting admitted to SSLNT Women’s College in Dhanbad.

On how she felt after returning to her alma mater after a gap of more than three decades, Dutta said: “I visited the institute for a brief period in 2014 and I was deeply peeved over the state of affairs. Roofs of classrooms were leaking, the hostel rooms were congested and there was a lack of equipment. However, there has been a sea change in the scenario. All the hostels have been renovated, a new girls’ hostel and centres of excellence and innovation have also come up. The laboratories have been upgraded.”