Section 56 of the Wildlife Protection Act, 1972, allows forest department to seize the vehicle, in this case, the locomotive which caused the accident 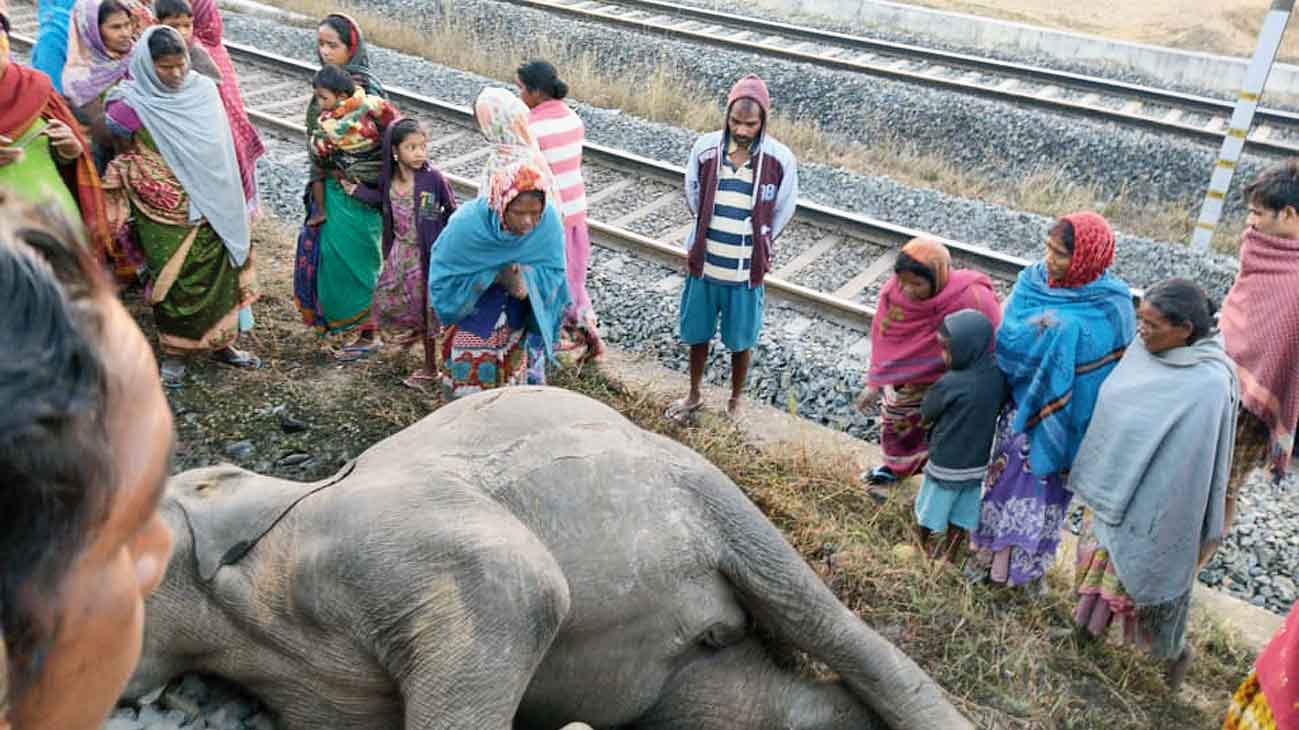 Locals gather near the carcass of one of the elephants near Mahipani railway crossing
Bhola Prasad
Animesh Bisoee   |   Jamshedpur   |   Published 05.02.21, 02:46 AM

In perhaps the first such instance in Jharkhand and Odisha, a forest division team from Rourkela sought to detain the driver and the goods train which had mowed down two elephants early on Thursday.

The goods train hit and killed the elephants near Mahipani level crossing close to Jeraikela railway station which falls under Bisra range of Rourkela forest division in Sundergarh district of Odisha around 1am.

The tracks pass through an elephant corridor where the incident happened.

Around 8am, a team of Rourkela forest division, led by assistant conservator of forests Dilip Kumar Sahu, reached Manoharpur station under Chakradharpur division of South Eastern Railway in West Singhbhum district of Jharkhand where the goods train had stopped, to detain the driver and the train.

However, this led to a heated exchange of words for nearly two hours between the four-member team of forest officials and the RPF unit of Manoharpur over the issue.

Finally, the matter was resolved after talks between Manoharpur station manager S.K. Das and Sahu.

“We got information from our forest guards that the train was travelling well over the permissible speed limit when it hit the two elephants, one aged 15 and another five years, leading to their death. According to Section 56 of the Wildlife Protection Act, 1972, the forest department has the right to seize the vehicle, in this case, the train which caused the accident.

“The driver is at fault as there is a standing circular from the railway ministry to run trains between 20kmph and 30kmph along identified elephant corridors. The site of the mishap falls under one such elephant corridor. From the reports which we have gathered from our forest guards and looking at the severed parts of the dead elephants, it is clear that the train was running at a speed of well over 80kmph when the mishap took place,” said Sahu.

He further said that they relented from detaining the train and the driver on the request of Manoharpur railway officials who assured they would be producing them within 24 hours.

“The railway officials said that the parcel train was carrying essential commodities and the driver had changed duties.

“We have asked them to find out from their official records about the driver who was on the train when the mishap occurred and produce him and the train before the forest officials within 24 hours,” Sahu added.

According to railway sources, the parcel train was going from Nasik in Maharashtra to Shalimar (Bengal) when the mishap took place.

Meanwhile, senior divisional commercial manager, Chakradharpur, Manish Pathak, on Thursday evening issued a media communiqué which said that one wagon of the goods train got derailed after hitting the elephants and both the up and down lines were blocked after the accident.

However, no person suffered any injury. The two dead elephants were removed from the tracks at 6.30am and the lines were restored thereafter.

The communiqué also said that trains ply in the elephant corridor following forest department rules, including blowing the whistle for a longer period and drivers keeping a sharp lookout for animals moving on the tracks.

Manoharpur is around 150km from Jharkhand capital Ranchi.