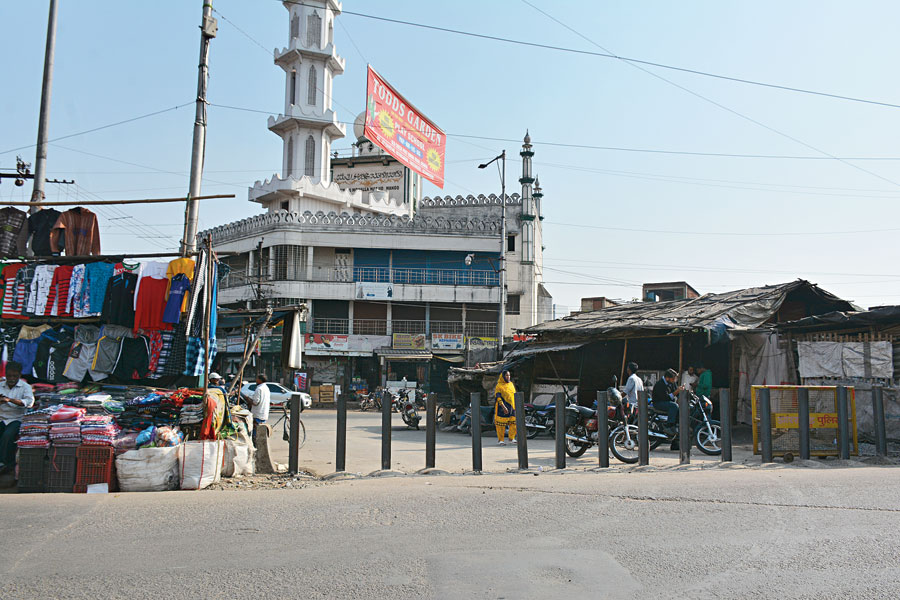 The barricades opposite Darbhanga Dairy on Dimna Road on Friday.
Picture by Bhola Prasad
Our Special Correspondent   |   Jamshedpur   |   Published 14.02.20, 08:29 PM

The Mango Notified Area Committee (MNAC) has put up iron barricades on two intersections of Dimna Road to prevent congestion and traffic-related hassles on the busy artery.

Dimna Road serves as the entry point to the steel city from NH-33 and witnesses a steady flow of vehicles throughout the day. The road hosts several business establishments, apartments and schools. Nearly 70,000 vehicles cross the 3.5km stretch daily. Last year, heavy vehicles were prevented from moving on that road during the day.

The barricades were erected on Thursday at the intersection opposite Darbhanga Dairy and near Subhas Colony. “The barricades have been put following a survey,” said an MNAC official who requested anonymity. “They will help in reducing congestion and ensure smooth flow of vehicles on the four-lane road.”

Every day commuters used to face a tough time due to long queues at the intersections. Now, vehicles after entering Dimna Road can take a turn at the Jagdeo Palace intersection, which is wide enough to facilitate movement of at least two cars at a time.

The intersections opposite Darbhanga Dairy and near Subhash Colony are narrow, often resulting in congestion during office hours and dispersal of schools. Residents were happy. “Better late than never. Good sense prevailed in the civic body which came up with the barricade. It will prevent congestion and ensure smooth traffic flow,' said Hemant Kumar, a schoolteacher who lives on Post Office Road in Mango.