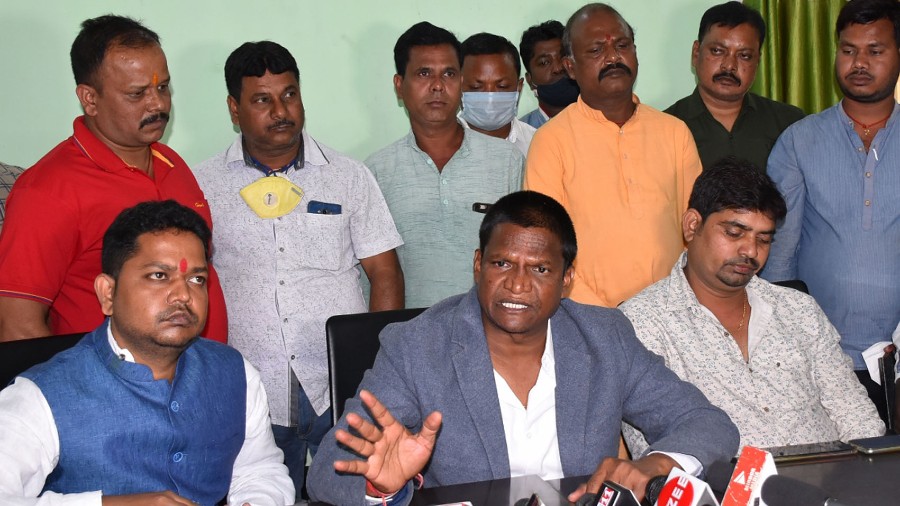 A day after the chakka jam turned violent in front Sindri’s ACC Factory, Dhullu Mahto, BJP MLA from Baghmara organised a press conference to accuse the police and administration of taking unilateral action to control the mob. He has even demanded a comprehensive probe into the issue.

Talking to the media, Mahto said, “We need to look at things logically. If the agitators had been demonstrating before the factory for over five hours (10 am to 3 pm) then why would they turn violent after having a successful talk with the administration?” He claimed that those who had participated in the dharna were not in the stone-pelting incidence.

“The district administration should probe into the incident to find out people involved in pelting stones. No action should be taken against the poor who have lost their land to the factory and were demanding jobs as compensation,” said Mahto.

He maintained that not many would willingly give away their land for the sake of industrialization, if the unilateral action will be taken by the administration.

“Those stationed at the ACC headquarter in Mumbai are unaware of the misdeeds of their local administrative set up at Sindri. These local officials are hands in gloves with the local goons. As a consequence, only a selected few are benefitting from the perks,” charged Mahto, while demanding an impartial inquiry to unearth the truth.

“I have been working for the rights of the deprived, marginalized, exploited, and the oppressed. No pressure can deter me from doing my work,” thundered Mahto.

Notably, Dharmajit Singh, district president of Tiger Force, a youth organisation, who had led yesterday’s agitation at Sindri and had later participated in a dialogue with Surendra Prasad, sub-divisional officer, inside the cement factory, said, “A fight for a genuine cause can’t be suppressed by caucus which is operating in the factory in name of a labour union.”

Police have arrested around 11 persons, including four women, for participating in yesterday’s chakka jam. They have also lodged an FIR against 25 people, including those arrested. A probe has been initiated to identify individuals involved in the incident.